The Devil May Wear Prada, but Everyone Else Wears Isaac Mizrahi

February 21, 2007: Wow—Fashion Week—Last week in New York, this week Milan, next week Paris.... Sounds exciting, right? Yawn. Oh, sorry... I am just so unimpressed by what passes for style on the runways these days—me... and about 97 million other American women.

Don't get me wrong. I love fashion. And women all over this country love fashion—clothes in beautiful colors, fabulous fabrics, the shapes and silhouettes, the style, the drape, the line, the handbags, the shoes, the accessories—what's not to love?

Across the nation, $131 billion was spent on women's apparel in 2005 (that's more than the gross domestic product of Singapore, New Zealand, or the United Arab Emirates), with the average household shelling out $1,178 on annually.

Women love fashion. But fashion doesn't love them. Not real women, at least. Women love beautiful clothes. But most women aren't supermodels—in fact, the average American woman is 5'4", weighs 140 lbs., and wears a size 14. So most American women find the fashion industry a bit out of touch.

Who is in touch with the millions of American women with billions of dollars to spend? Savvy companies like Target, Chico's, and J.C. Penney, that's who.

Target has recognized that fashion is not just for the elite, for the super skinny, for the runways in New York and Paris. The masses—the millions of American women who shop at discount and department stores every day—want fashion too.

Target has elevated itself and generated phenomenal growth by redefining itself as an icon of affordable style and design. First Michael Graves housewares, then Todd Oldham home furnishings, now Target has joined forces with Isaac Mizrahi to bring affordable runway fashion to every woman.

Target has put all of its "designers" together under one marketing banner, "Design for All: Great design, every day, for everyone." Amen!

Isaac Mizrahi not only gets the head start on the competition, and lots female fans with weighty wallets, but also gains some sense of satisfaction in helping 97 million American women look their best vs. designing only for the Fashion 1000 in the society pages. Chico's is one of the only fashion retailers to have recognized the fastest-growing demographic and financial force in the marketing world: PrimeTime Women, as I call them in my new book, are women 50-70 years old who make the majority of the decisions for the households and are at the peak of their spending power.

The key to Chico's success is its focus on differentiated sizing, styling, and service for the over-35 woman. The Chico's style is ownable to the brand; it's sophisticated yet fun, fashionable without being too trendy, elegant and flattering to older women's different body shapes.

The company trains sales associates to create personal relationships with customers, and it's easy for them to create that bond of "commonality" because they are the same as their customers—the same age, with the same apparel needs.

Chico's operates 907 women's specialty stores, in addition to a catalog business. While the overall women's apparel market is just now coming out of a long slump (sales down by nearly 10% from 1997 to 2004), Chico's profits have grown for nine consecutive years.

This smart company knows how to follow the dollar signs—right to the wallets of PrimeTime Women.

Only a decade ago, this department store was the land of dowdy unfashionable apparel. Under new leadership with a focus on stylish new store brands and thanks in part to a wonderful advertising campaign from DDB Chicago, J.C. Penney has become a force in fashion.

The company's new advertising features pretty and "real" American women, and the copywriting shows a clear understanding of what goes on in a woman's mind when it comes to fashion, how she feels about clothes, and how clothes makes her feel (see ad, below):

It's that feeling on the inside that shows on the outside. You can't borrow it. You can't fake it. You can't hide it, lose it, lend it, break it, shake it, or teach it a thing or two. You can't forget it or forego it, open it or close it. It's won't be ignored. And you definitely can't take it for granted. And when you've got it inside, you know it.

Has this fashion fix found fans? Well, after losing more than $900 million in 2003, J.C. Penney earned more than $1 billion last year. Coincidence? I think not.

The company plans to open 28 stores, its biggest expansion in two decades and a clear vote of confidence in the future. 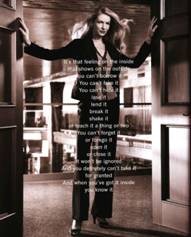 Fashion Week fashionistas are talking to themselves. Call me crazy, but I thought the job of marketers was to talk to their customers.

Somebody's going to figure it out first—that savvy company will claim billions and billions of dollars from the fashion-loving women who finally meet fashion that loves them back.

Marti Barletta is the founder and CEO of consulting think-tank The TrendSight Group  (www.trendsight.com) and the author of PrimeTime Women: How to Win the Hearts, Minds, and Business of Boomer Big Spenders (Jan. 2007) and Marketing to Women: How to Understand, Reach and Increase Your Share of the World's Largest Market Segment (Dec. 2002). Reach her at marti.barletta@trendsight.com.

Are you a Premium Plus member of MarketingProfs?  You can replay our 90-minute virtual seminar with Marti, Reach the Big Spenders:  How to Market wo Women from 50 to 75.