Frugal consumers who are choosing to put more of their money into their savings accounts rather than into retailers’ cash registers translates into a less than rosy 75-day forecast for most retailers tracked by ForecastIQ.

Although conditions improved for 17 of the 27 retailers tracked, the expected increases in same-store sales are small and the overall forecasts for most are still negative. Exceptions to this appear to be Aeropostale, Buckle, Ross, TJX, and Cato’s, which look to show an increase in same-store sales.

Retailers almost certain to see a decline in same-store sales over the next 75 days include higher-priced retailers such as Abercrombie & Fitch, American Eagle, Gap, Neiman Marcus, Nordstrom, and Saks. On the brighter side, it looks like the big declines have ended and small increases or no increases are the norm for most. 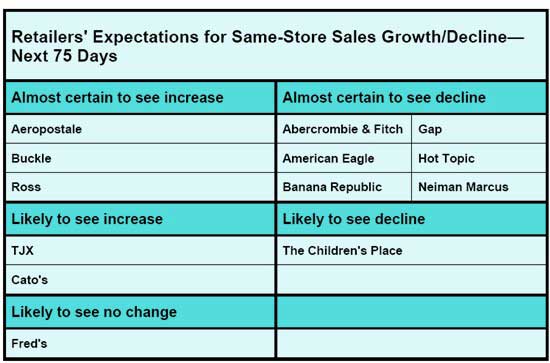