Email volume increased 5.4% in the fourth quarter of 2012 vs. the same period a year earlier, though volume levels varied dramatically by industry, according to the Experian Marketing Services 2012 Q4 email benchmark report, which also found that email open rates were on average highest on Saturdays and Sundays.

Below, additional findings from Experian Marketing Services email study, based on campaigns conducted in the fourth quarter of 2012.

The travel industry recorded the largest increase in email volume during the quarter: Two-thirds of travel brands increased mailings, driving email volume up 21.4% YOY. (The category had a similarly large increase in the previous quarter.) Publishers (up 14.3%) and consumer products and services brands (10.4%) also recorded double-digit gains in email volume in 4Q12. 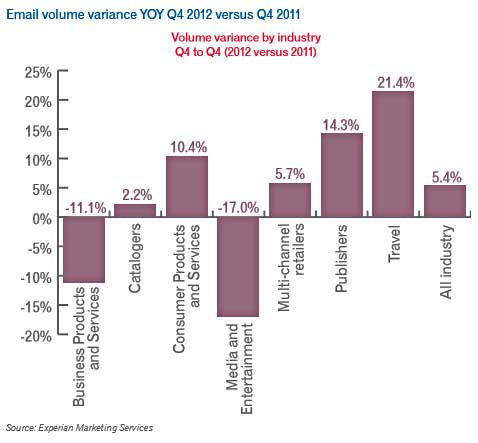 The media and entertainment and business products and services industries recorded double-digit declines in email volume in 4Q12 (down 17.0% and 11.1%, respectively).

Other findings issued by Experian for the fourth quarter: 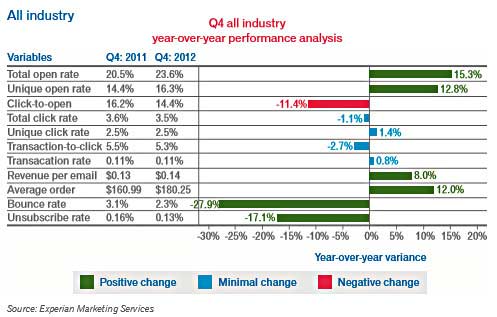 Email response times are rising. From 2010 to 2012, the proportion of opens and clicks received at “one day from send” rose 5% and 6%, respectively. Mobile devices are driving the trend, Experian noted, particularly because mobile opens more than doubled during the same period.

Though the “best” time and day to mail varies by industry, Experian issued averages across all industries for the quarter. Emails issued on Saturdays and Sundays had higher open, click, and transaction rates—but much lower volume. During the work week, Monday had the highest revenue per email, whereas Friday had better click rates:

Email volume also played a role: Campaigns issued from 8 pm to midnight and from midnight to 4 am had higher responses than the more popular 4-am-to-noon time period:

About the data: Findings are based Experian Marketing Services’ client mailings conducted in the fourth quarter of 2012.