#SocialSkim: Will Social Kill Websites in 2016? Plus 13 More Stories in This Week's Roundup

This week is packed with portents for the year yet to come. Find out why brands might want to prioritize websites less (and social content discovery more), and get a first look at the ad tool Google's releasing to help brands market live to users across devices (just in time for the Super Bowl!).

Websites could be over... and it might be Facebook's fault.

Last year, Apple released iOS 9 with ad-blocking support. In the same year, Facebook introduced Instant Articles, meaning content could be hosted on—and read from—its platform without ever visiting a website. Publishers, such as Vox, are already publishing directly to Facebook, and others, including the Washington Post, have started posting 100% of its stories to the platform.

Over time, this trend would mean plummeting click-through rates and Web traffic, but it also provides new ways to discover brands, with social as the central point of contact.

This year, take a serious look at how your strategy can better accommodate this apparent shift. And if you feel uncomfortable placing all your bets on Facebook (as one should), consider how to hedge risk by cleverly incorporating Snapchat and Instagram into your content dissemination plans. 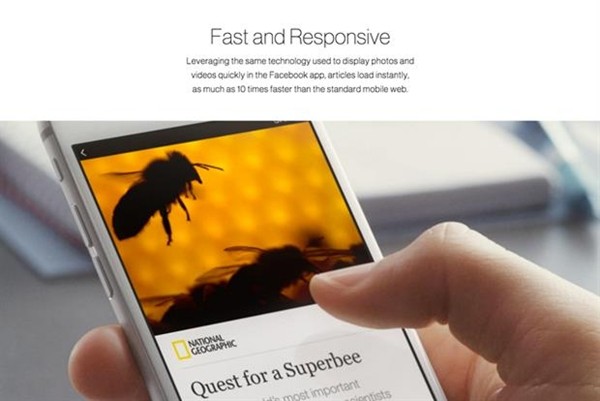 Just in time for Super Bowl 50. Facebook's "Sports Stadium", currently only available for iOS users in the US, empowers the site's 650 million sports fans to talk about games, stats, and even enjoy live play-by-play action. Think of it as a new spin on ESPN... with a much larger pool of fans. 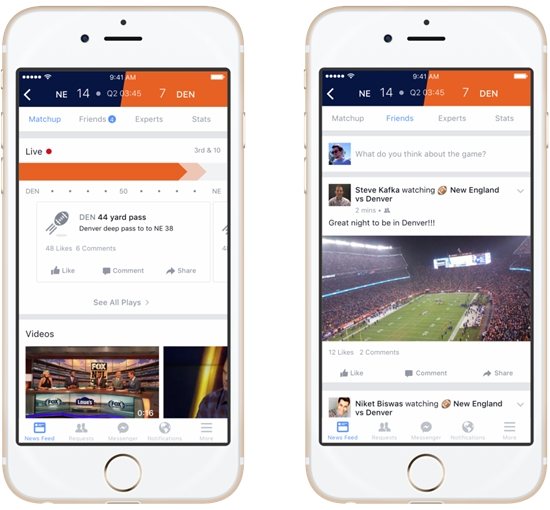 Facebook's other standalone mobile messaging application, WhatsApp, is knocking down its paywall. (Previously, users had to pay 99¢ per year after the first year of service.) And instead of introducing third-party ads to cover the lost revenue, WhatsApp is testing tools that let brands communicate directly with consumers.

Mimicking Facebook Messenger's efforts to incorporate services like Uber, WhatsApp plans to stimulate organic interactions between users and businesses to increase monetization opportunities once a critical mass of users is participating. Examples include contacting your bank to check recent transactions, or your airline to check the status of a flight.

3. Facebook's testing a new browser to ensure users never have to leave

The social giant's current "browser" is limited in functionality: It just loads the pages users want to read, and follows hyperlinks to external sites. The company's now testing a design that includes back and forward buttons, bookmarking capabilities, a status bar that tells you how popular a post is, and possibly even a URL bar where users can navigate elsewhere without ever leaving. Well, we always knew Big Brother would come in blue. 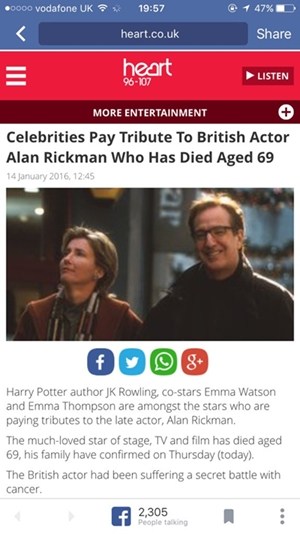 Dubbed "Real-Time Ads," the new format lets brands distribute ads in real-time on YouTube, across hundreds of thousands of Android apps, and on the two million-plus sites on Google's display network. The ad type will let brands interact with users instantly during live events—think Twitter, in an ad format!—to capture more engagement.

The tool will be available during the Super Bowl; brands Comcast and website-builder Wix pledging to use it already. (It'll be Oreo's Super Bowl Blackout coup every day!) But since brands can't always react as quickly as they'd like, Google admits that for the time being most ads are still pre-planned. 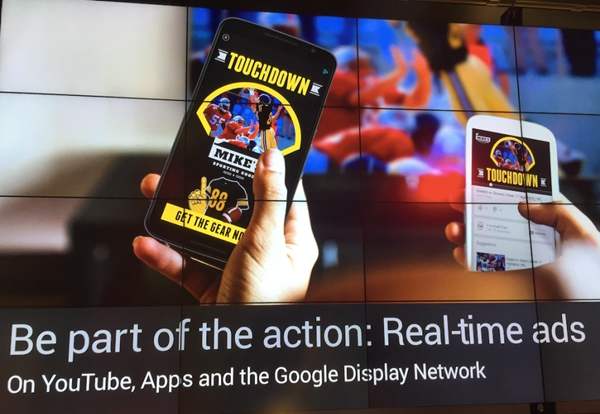 Foursquare may have coined the concept of the "check-in," but in the last seven years it has struggled with how best to build on that model. Some years ago, it relegated location-based check-ins to a spin-off app called Swarm and transformed Foursquare itself into a review-based Yelp competitor.

With its latest leadership shift, the CEO is repositioning Foursquare to "[make] consumer experiences richer and [inform] business solutions," suggesting it will be more B2B-focused than it is today. Watch this space!

Since the program's launch in October, Twitter's tallied the total votes in its polling feature and has opted to abandon the default 24-hour time limit, allowing users to define polling lengths from five minutes to seven days. The change comes as Twitter faces investor pressure; its shares have slid to a record low because of its failure to meet user-growth estimates. (Twitter has 320 million monthly active users, nowhere near Facebook's 1.55 billion.) 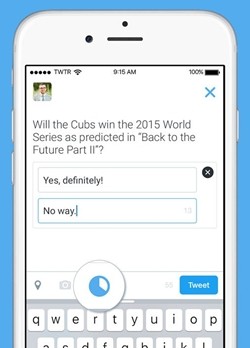 A report from social analytics firm Locowise says Instagram's losing its viral edge: Plummeting follower growth in 2015 resulted in average engagement rates' dropping from 2.8% in January to 1.08% in December. And though its follower growth remained stronger than Twitter's or even parent company Facebook's, the stats show its organic growth isn't what it used to be. Time to consider that ad buy? 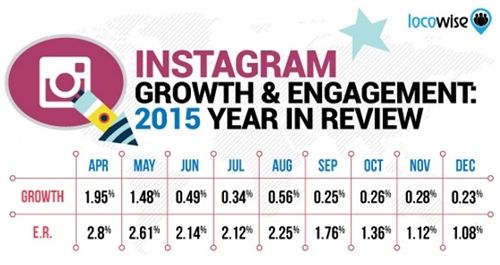 8. Here's how brands are tapping into Facebook Messenger's 700+ million users

Brands are increasingly diving into Facebook Messenger to build one-to-one relationships with consumers. Companies, including Hyatt, are using the mobile app for customer service, banking on the idea that the its humanizing features—such as read receipts and real-time "typing" icons—will improve customer experiences (let's face it, we agree).

In more creative applications, Universal Pictures and Disney used Facebook's developer tools to build in-character bots, like Doc Brown from "Back to the Future," to interact with users and even incorporate product placement for brands, such as Pepsi. Here's to getting in on the mix, and finding more unique ways to use Messenger for your brand. 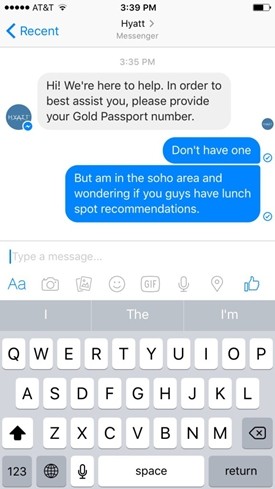 Competitor Meerkat has fallen by the wayside, and Facebook Live isn't yet widely available, so Periscope is on the offensive, winning users through increased interaction, quickly incorporating feedback, and targeting influencers. Nobody knows how big the app will get, but we do know that consumers demand video—increasingly in real time—so prepare for the shift.

Two-thirds of American adults own smartphones, and 80% of the world's online adults do, too. With all those eyes on screens and social networks, learn how to up your visual content game, take engagement to the next level and spice up your feed with this helpful guide. Covered in detail: How and why you should choose a photo, leveraging the platform for event support, driving traffic, showcasing company culture, building employee relationships, rewarding partners and building exposure.

Today in tools worth bookmarking: Pexels is a repository that hosts over 5,000+ free-to-use stock photos, including landscapes, people on mobile devices, and more. Why we love it: This isn't your dad's Getty. The photo selection has a spontaneous, caught-in-the-moment feel, and most look positively Instagram-ready: 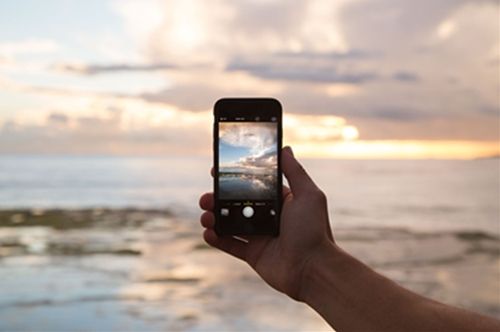 12. Why Facebook's viral publishers are turning to video

We're all familiar with the Elite Dailys, BuzzFeeds and Upworthys of the world—viral publishers that depend on Facebook for website traffic. And now that Facebook's algo prioritizes video above all else, these publishers have seen a marked decrease in these content performance, so brands are shifting to video. Millennial-focused Elite Daily's traffic decreased 38% in December compared with January of the same year.

Like brands, publishers are slashing jobs and shifting more resources to video, showing to what degree the industry's at the mercy of Facebook's whimsical algorithm. As a business, it's critical to stay ahead of these changes.

13. We'll wrap with an eye-opening outage in the Twittersphere

Chalk it up to another bad day for Twitter shares on Wall Street, but Tuesday morning worsened the site's situation when a software glitch took the platform offline for users across the world.

Social connection, safety, and security are fundamental drivers of human behavior, and this week's round of outages helped some people realize just how big a role social plays in their lives: Half the world's population uses social media regularly. To sum it up in one 140 characters or less...

With #twitterdown, I noticed this square-shaped hole in my wall that gave off light. Apparently it's a window, but I can't minimize it.

Continue reading "#SocialSkim: Will Social Kill Websites in 2016? Plus 13 More Stories in This Week's Roundup" ... Read the full article