Language continues to evolve and cross national and cultural borders, and its users have always helped shape its evolution. Take, for example, the New Oxford American Dictionary's 2009 Word of the Year, "unfriend."

It was said to be an official term that Facebook used. But according to other reports, "unfriend" is what community users came up with, whereas the official Facebook term is "remove connection."

Either way, each culture, including regional cultures within larger cultures, develops unique sets of jargon and slang.

In an age of digital media, how are such new terms being translated? But first, what is digital media? This definition sums it up nicely: "Digital media consists of the various platforms on which people communicate electronically."

We know that interactive media platforms are a global phenomenon, occurring in all markets regardless of the level of economic, social, and cultural development in those markets. People are using those platforms to communicate and interact. Therefore, when translating content into other languages, it's critical to define clearly. But what is the best approach? How does search-engine optimization (SEO) factor into the equation? What do properly translated digital-media terms in Spanish, Japanese, and Chinese look like? 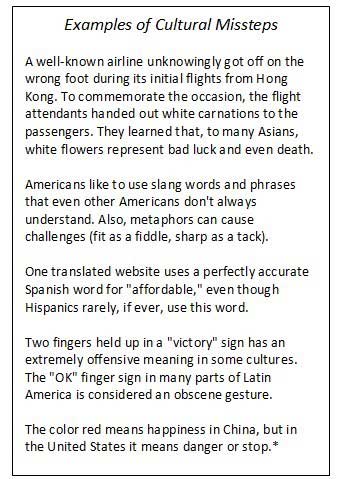 Building Your Brand Globally—Tips for Localizing Your Digital-Media Campaigns

In the United States, it is important to build your personal brand. However, in Germany or the United Kingdom, pointing out your successes is, except when done very tactfully, considered boasting rather than legitimate communication. It'll put people off.

Latinos, generally speaking, are a very experiential culture, driven more by emotion and experience than by data.

Chanin Ballance is CEO of Veelo, an award-winning cloud-based marketing and sales performance platform. Chanin is a frequent speaker on the topics of learning and retention, brain science, mobile engagement, and sales enablement solutions.