You can choose many approaches to market your online business: PPC, online display ads, print ads, workshops, webinars... to name only a few.

If you're like the vast majority of online businesses that don't have hundreds of millions of dollars to spend on brand- and image-based advertising, you should be using, if you're not already, a direct-response marketing approach.

Here's what advertising legend David Ogilvy had to say about direct response marketing vs. general marketing and advertising:

Much of what Ogilvy shared in this video is just as relevant today as it was then.

Direct response is "a type of marketing designed to generate an immediate response from consumers, where each consumer response (and purchase) can be measured, and attributed to individual advertisements."

Now, there are two common ways to go about this approach: You can use an extremely targeted, one-shot approach and go for the sale right away, or you can roll out a campaign with a distinct and planned follow-up component.

The question is, Which of these will drive more revenue and deliver greater profit?

Before we can get into the method you should use, it's important to understand both options.

With this approach, you start off with a clear understanding of what problem you are solving. You then find out who your ideal clients are and you create a marketing piece to reach them. That marketing piece could be a letter, email, postcard, online ad, or print ad.

Your goal here is to make sure (a) that the eyeballs you reach are the right ones and they are hungry for what you have to offer, and (b) that your marketing piece is going to be so well crafted that it will move your ideal client to pick up the phone or click a button and place an order.

When you've got the right message and you've placed it in front of the right audience, dramatic sales can follow.

The Two-Plus Step Approach (AKA, the Campaign)

Although the campaign approach starts off much like the direct one-shot approach in that you need to make sure you understand what problem you're solving and how to reach the right audience, and you create a strong marketing piece to put in front of them, that's where the similarities end.

With the campaign approach, your initial goal isn't to sell right out of the gate. Your primary focus is to get your ideal audience to join your list so that you can send them marketing messages over a period of time.

You might send your list a series of messages for seven days or seven months or longer.

The campaign is all about providing your ideal clients with valuable and educational information that moves them along the educational spectrum from "interested" to "ready to buy."

This approach won't give you an instant surge of sales. Instead, your plan is to make sales over a period of time.

Let's look at a few examples using each of those approaches. 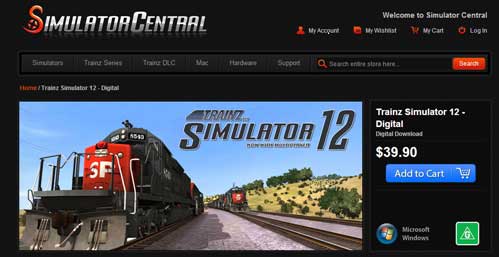 Auran Games, maker of Trainz, has sold over one million copies of the game since 2001. Its customer base learns about the program through gaming news, industry publications, and online ads. A Trainz buyer will go directly to the company's site and purchase the game. Because the brand has been established over many years and its customers don't spend much time deciding whether or not to buy the game, the direct one-shot approach works and allows the company to make a sale directly. 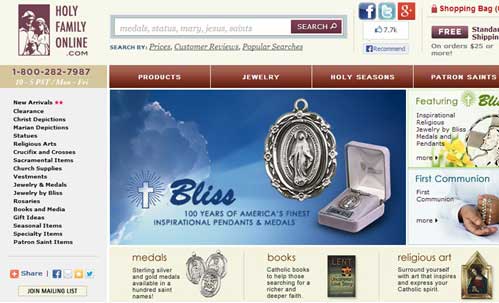 Holy Family Online (HFO) sells custom-designed sculptures and statues as well as jewelry online. It invests a large portion of its marketing budget on PPC to drive targeted traffic to the site. Because the keywords used in the company's PPC advertising are aligned with what a prospective buyer is looking for at that very moment (and is already thinking of buying), HFO is able to make direct one-shot sales. Even without a follow-up plan in place, the site is able to sell hundreds of pieces each month.

FreshGigs.ca, a site for marketing and creative jobs, put together a letter targeting employers that were posting jobs on other jobsites. It sent out that letter with a clear explanation of the value the employer would receive by posting jobs on its site vs. general jobsites. The mailing brought in a 250% ROI and worked well because the employers targeted were already using a similar service and were open to trying one that offered them greater value.

Clearly the direct-go-for-the-sale one-shot approach works. But how does it compare with the Campaign approach?

2. Three Examples of Campaigns and How They affected Revenue 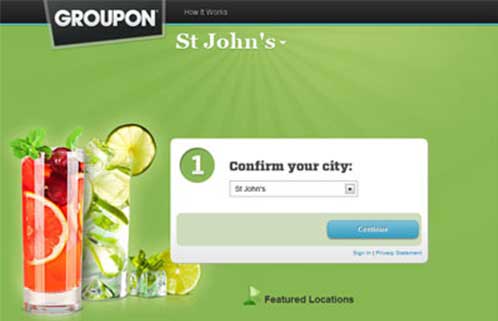 Groupon and Living Social are two examples you may not think of right away when considering campaign marketing, but both have built their business with this approach.

They've invested in online and TV advertising to drive millions of prospects to their landing pages. Once people sign up, they start getting daily emails with specials.

If Groupon tried to make a sale the very first time it sent someone to its site instead of getting the user to sign up, it'd have a very hard time growing its business.

These companies' marketing is powerful because they are connecting with you on a regular basis, and that means more opportunities to buy from them.

Perry Marshall conducted a study and found that he could increase his value per visitor from $5.72 to $6.64 simply by getting people to sign up for his autoresponder funnel, compared with sending them directly to a sales page. 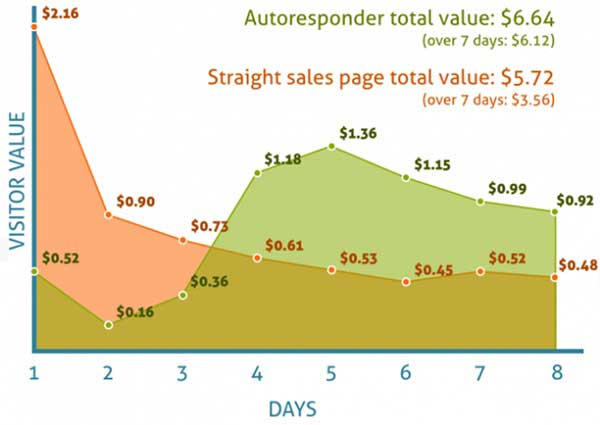 That same result has been re-produced at Business Consulting Buzz, my business, where the majority of the site's sales come as a result of its autoresponder series. However, in contrast to the Perry Marshall example, a large portion of sales come within the first 1-4 days as opposed to 4-8 days. 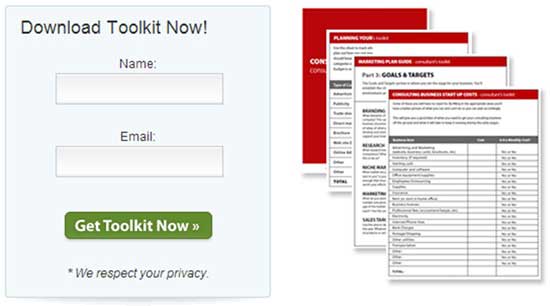 And then there's data from Gleanster Research, shared by HubSpot, showing that 50% of leads are qualified to buy but won't be ready to right away. If that finding holds true in your industry, it could mean that failure to use the campaign approach would jeopardize your sales by a massive percentage.

Benefits of Each Approach

We've now looked at cases of companies using one or the other approac. What are the benefits of each, and which is the best?

The direct one-shot approach has some great benefits:

There is, however, a big negative to this approach: If you don't make the sale, you've lost the chance to sell again to that prospect. You either make money, or you don't. Your only second chance is to spend more money running another mailing or placing another ad.

The benefits of the campaign approach:

The negative of this approach is that it can take longer to start producing sales. Sometimes, depending on how you've structured your follow-up campaign, it could take a week or months to turn the campaign ROI positive.

So which approach wins? Don't shoot the messenger, but as you've likely guessed... it depends. There is no magic one-approach-fits-all solution.

The reality is that you will need to test both approaches for yourself and see which works better. You definitely want to keep in mind two considerations when deciding which approach to test first.

1. The cost of your product or service. The higher the price tag, the more educating you'll have to do. A higher price typically calls for the campaign approach.

2. Your ideal buyer. If you're selling an app to teenagers, it's unlikely that you'll need to put them into an autoresponder funnel and sell them on the benefits of it. It's something they likely know about already and want. All you need to do is direct them to the sales page and make it easy for them to buy.

On the other hand, if you're selling a piece of software for small businesses, even if the price tag is fairly low, the complexity of the product likely calls for the campaign approach, allowing you to educate your buyers so they become confident in making the purchase.

As with any good marketing, you need to have your foundations in place. And that includes taking the time to understand who your ideal buyers are and how you will reach them effectively.

Once you've figured that out, you should move on to testing the approach you think would be the best fit for your market. Then, if doing so makes sense, test the other one to compare.

Test, track, and adjust your marketing, and you'll be well on your way to success.

Michael Zipursky is a direct marketing consultant, an author, and a co-founder of Consulting Success, a resource for consultants.