When respondents were told about three typical ways that information is gathered about consumers in order to tailor ads to their interests, even greater percentages—between 73% and 86%—said they do not want to see such advertising:

The Influence of Age

Although the study found that younger Americans are less resistant to tailored ads than older Americans, more than half (55%) of respondents ages 18 to 24 reported not wanting tailored advertising, and 86% said they don't want tailored advertising if it results from the tracking of their behavior on other websites. Fully 90% of them reject it if it is the result of following what they do offline: 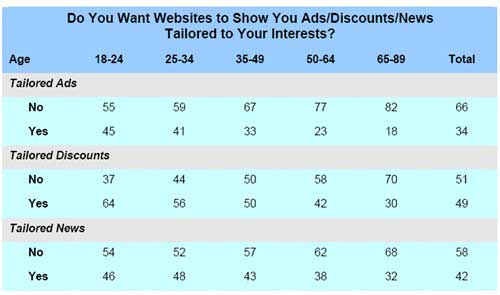 Reasons for Resistance to Targeting

The study authors surmise that resistance to behavioral targeting stems from these reasons:

The study authors conclude their report by saying that "Americans want openness with marketers" and by offering some suggestions as to how marketers can help achieve this.

About the data: The survey was conducted from June 18 to July 2, 2009, by Princeton Survey Research Associates International. PSRA conducted telephone interviews with a nationally representative, English-speaking sample of 1,000 adult Internet users living in the continental United States.