Should those prove to be actual adoption rates, they would firmly establish such devices in the American mainstream and inject fresh hope into the publishing industry, which is struggling to generate online revenues, BCG said.

"The survey suggests that e-readers and tablets are not a niche product for early adopters but could become the MP3 players of this decade. Grandmothers will soon be carrying them around," said John Rose, the global leader of BCG's Media practice.

There is a strong preference for multipurpose tablets: 53% of consumers say they would like to own a multipurpose e-reader, such as an iPad, compared with 39% who prefer single-purpose e-readers, such as Amazon's Kindle, the Nook from Barnes and Noble, or the Sony Reader.

Below, additional findings from the BCG study.

Widespread adoption will depend in part on a drop in prices: The sweet spot for multipurpose devices is from $130 to $200—far below the $499 entry price of the iPad—while the desired price for a single-purpose device is from $100 to $150.

Consumers also want more flexibility in purchasing content rather than being locked into a single source, such as the iTunes store: 91% of e-reader owners and 83% of those interested in purchasing an e-reader say they are likely to buy more content if multiple retailers are available. 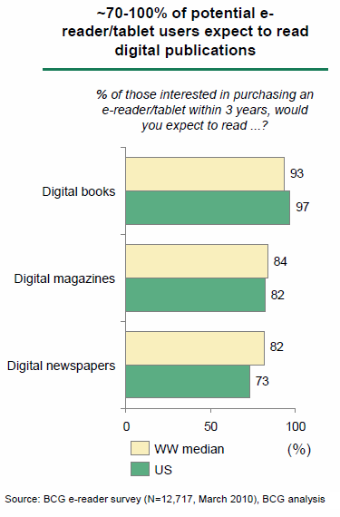 Among those who already own an e-reader, 89% now read digital books, 50% read digital magazines, and 34% read online newspapers.  In addition, 64% want to read other magazines and newspapers in the future.

US consumers say they are willing to pay $2-$4 for a single issue of an online magazine (comparable to the cost of the print version) and $5-$10 for a monthly newspaper subscription—which is less than a print-news subscription.

Consumers are willing to pay only $5-$10 for a digital book, however; that's below the price most book publishers are targeting. 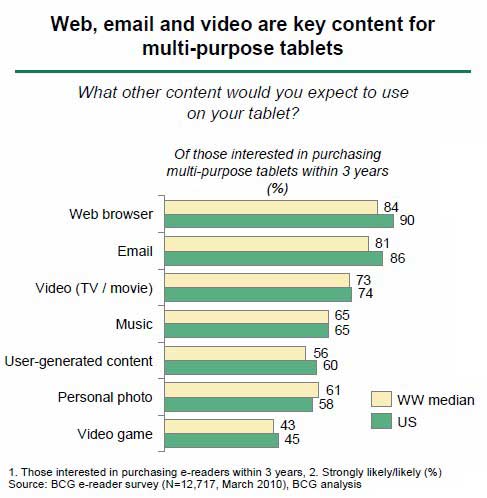 "The survey suggests that Apple's strategy of offering a wide degree of functionality makes sense," said Dominic Field, US leader of BCG's Media practice. "But the results also call into question Apple's preference for a closed system."

About the data: The survey was conducted by the Boston Consulting Group via the Web in March 2010 among 12,717 respondents from 14 countries: Australia, Austria, China, Finland, France, Germany, India, Italy, Japan, Norway, South Korea, Spain, the UK, and the US. There were 950 or more respondents from each country, except for the following: Austria (697), China (813), Finland (696), and Norway (697). Respondents, equally divided between men and women, were Web users and readers of print books, magazines, or newspapers.