With the 2010 FIFA World Cup in South Africa set to begin on June 11, US Internet searches related to the World Cup during the week ended May 29, 2010 were up 10% from levels recorded a week earlier, and up 64% from a month earlier, according to Experian Hitwise.

Many World Cup searches in the US referenced game schedules, which ranked No. 5 in the week ended May 29. The keyword "schedule" was included in 68 different queries among World-Cup-related searches. 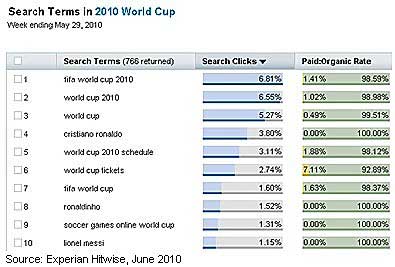 Also popular were search queries related to where to watch the World Cup online or via mobile phone.

Among the ESPN Top 50 Players of the World Cup, Cristiano Ronaldo of Portugal was the most-searched player, accounting for 38% of search clicks during the week ended May 29. Ronaldo—ranked No. 2 on the ESPN Top 50—was recently featured (shirtless) on the cover of Vanity Fair magazine in the US, which likely boosted awareness. 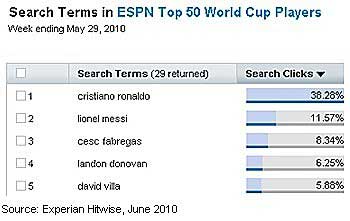 Argentina's Lionel Messi, accounting for 11.57% of search clicks, ranked second in searches but holds the top rank on the ESPN Top 50. Landon Donovan, the only US player in the Top 50, was No. 4 in search clicks (6.25%).

Asked how consumers intend to follow the World Cup, many fans are choosing mobile: 21% of fans worldwide say they will get at least some of their information from the Internet via mobile device and another 9% plan to use applications on their phones, according to separate research from Nielsen.

Across the geographic regions surveyed: