When stocking up on back-to-school items, consumers love Target and Old Navy—and are more passionate about those brands than they are about any other major US retailer, according to the NetBase Brand Passion Index, which measures the intensity of consumer passion for brands among users of online communities. 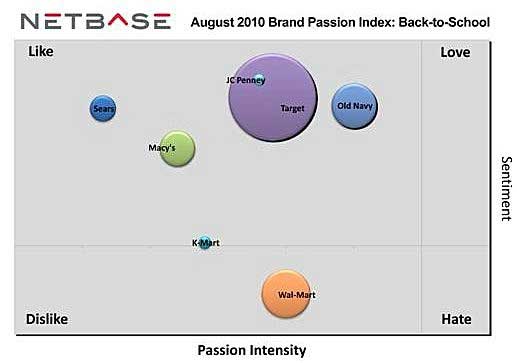 Macy's and Sears both received fair amounts of chatter, but the positive sentiment for those brands was much less passionate.

Using measures across a spectrum of emotions—love, like, dislike, and hate—the Netbase Brand Passion Index reads and understands what people are saying online, then surfaces and aggregates those likes and dislikes, as well as the emotions and behaviors associated with brands.

Below, excerpts from online discussions capture the passion that consumers feel about some of the major retail brands.

Old Navy shoppers expressed the most intense "love," but to a lesser degree than Target shoppers. Much of the positive emotion expressed for Old Navy was about that retailer's style and selection at affordable prices:

Nearly one-quarter (24.2%) of surveyed parents plan to spend less this year on back-to-school shopping than they did in 2009, according to separate research from America's Research Group (ARG) and UBS.

Among parents cutting back, over one-half (52.4%) say they are doing so because they have less money, compared with 41.8% who said so a year earlier.

Last year, debt was a concern: In 2009, 40.5% of parents cited higher debt as the primary reason they were cutting back on back-to-school spending, but that level has dropped to 28.6% this year.

"Two months ago, we estimated back-to-school spending would be up 5% to 7%," said C. Britt Beemer, CEO and Founder of ARG, "but after this study we have downgraded our prediction to be up only 1% to 3%."

About the data: To generate the August 2010 NetBase Brand Passion Index, ConsumerBase analyzed conversations around popular retail brands across the Web from Aug. 2, 2009 to Aug. 2, 2010.

The ARG/UBS Consumer Mind Reader Survey of 1,000 adults was conducted via telephone from July 5 to 8, 2010.