Texting among US adults has increased substantially over the past year, but still does not approach the magnitude of texting activity among teens: 72% of adult cell-phone owners send and receive text messages now, up from the 65% who did so in September 2009, whereas 87% of teen cell-phone owners exchange text messages on a typical day, according to a study by Pew Research.

Breaking down texting by message volume, 51% of adult texters send from 1 to 10 texts a day, whereas just 22% of teens send that many messages daily. 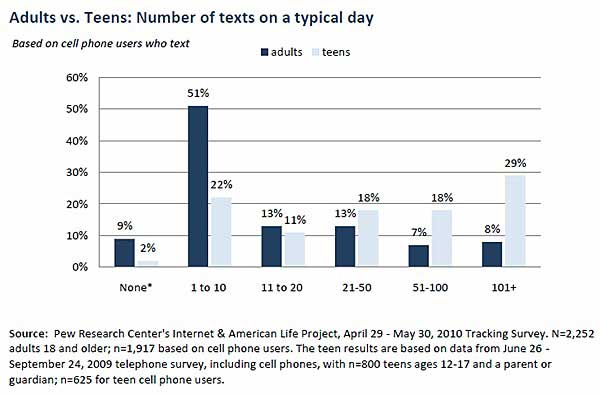 Just 15% of adult texters send 51+ text messages daily, compared with 47% of teen texters who do so.

Below, other findings from the study Cell Phones and American Adults, issued by the Pew Research Center's Internet & American Life Project and Project for Excellence in Journalism, which explores texting and calling behavior among adult and teen cell-phone owners.

Heavy texters—adults who send and receive more than 50 texts day—also tend to be heavy users of voice calling: 40% make over 20 calls a day. Light texters, those who exchange 1 to 10 texts a day, do not make up for less texting by calling more: 46% make fewer than six calls per day. 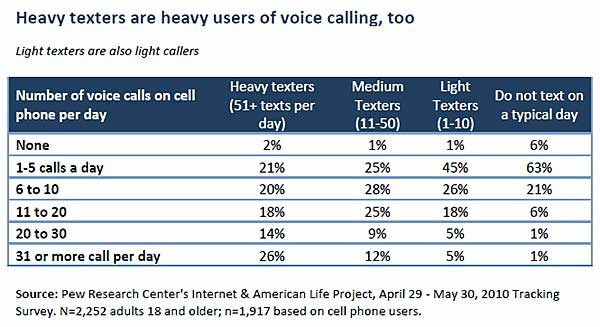 Still, for most adults, voice calling is their primary use of the phone: The largest segment (44%) of cell-owning adults makes 1 to 5 calls on a typical day. Only 5% of adults say they don't make or receive any calls on their cell phone on a typical day.

Among cell-phone owning teens, the largest segment (58%) also makes 1 to 5 calls on a typical day. However, cell-owning adults are more likely than teens to initiate and receive more than 20 calls a day, with 12% of adults making that many calls, compared with just 6% of teens.

Nearly two-thirds (65%) of adults say they have slept with their cell phone on or right next to their bed. 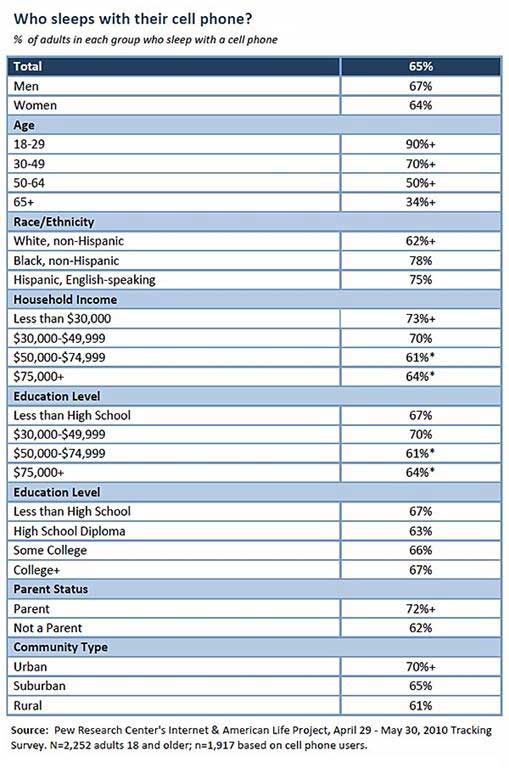 Some 72% parents have slept with their phone, compared with 62% of non-parents.

Teens Fight Boredom With Their Phone 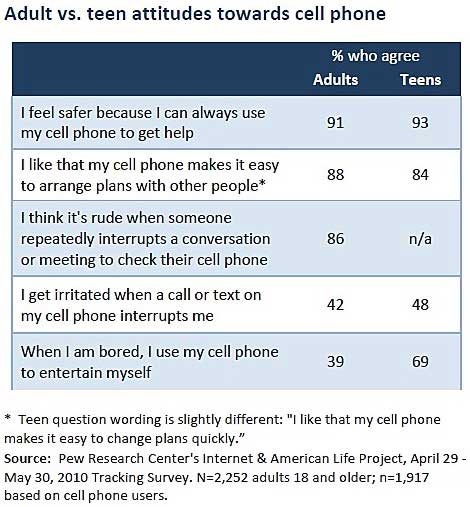 However, teens and adults diverge over attitudes toward the phone as a way to fight boredom: 39% of adults say they use their cell phone to entertain themselves when they are bored, compared with 69% of teens who say so.

African-American and English-speaking Hispanic adults are more likely to own a cell phone and to use their handset more intensively than their white counterparts.

About the data: Findings are from a survey of 2,252 US online adults age 18+, conducted by Princeton Survey Research Associates International, from April 29 to May 30, 2010, for the Pew Research Center's Internet & American Life Project. Data on teens is from a nationally-representative telephone survey with 800 teens age 12-17 and parents or guardians, fielded from June 26 to September 24, 2009.