Have a good holiday? This week's #SocialSkim kicks you back into gear with social stats, trends for the new year, and tips for keeping (socially) fit. And for the tomorrowhunters out there, we even managed to toss in a little future interfacing with smart light. (Don't worry, that'll make more sense as you skim.)

Engagement: a roundup. Let's start off healthy with the 10 things we learned about social engagement in 2012. A few good tips: sentiment is a fragile beast, so Poke with care. Second screen is increasingly commonplace and must be accommodated. Social is as important as SEO, in great part because it contributes significantly to your SEO clout. And LinkedIn? Still super-relevant for B2B. Maybe more so today as Facebook hits global saturation; more on that as you skim.

Your website is a wonderland. Looking to revamp your site this year? UX Mag and The Catalyst Group compiled the top 5 website UX trends of 2012. You may already know a few by sight: infinite scroll, "sticky navs," single-page sites, a stronger focus on typography, and the violent death of cutesy Web 2.0 aesthetics. Isn't change beautiful?

While you started the year looking dapper, Apple isn't. The computing and apps giant launched its first ad of the year, a promotion of the new "Do Not Disturb" feature for iPhone. Of all the features to choose, "Do Not Disturb" happens to be the one that bugged for everybody on New Years when, ironically, it couldn't be switched off.

In typically closed-circuit Apple fashion, comments for the YouTube video have been turned off. Youch.

The Facebookization of the globe. Facebook and Alexander the Great have one thing in common: a lust for global dominance. What don't they have in common? Facebook's got India in the bag. Social media strategist Vincenzo Cosenza's latest World Map of Social Networks illustrates that the world's top social networks are just five in number... and that Facebook dominates 127 out of 137 countries tracked by Alexa. 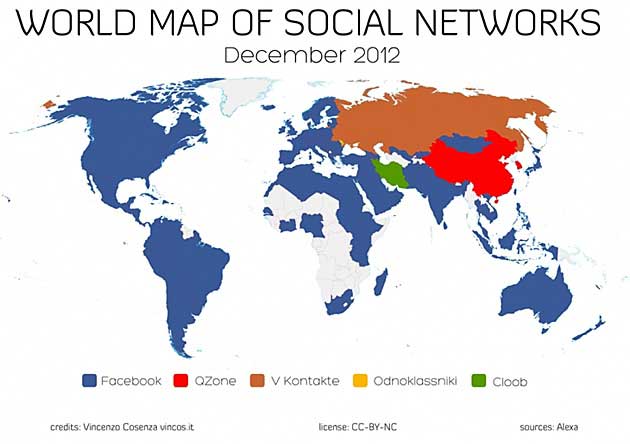 If you can't be Facebook, you can at least be the coolest guy there. No, wait, George Takei already is: Mashable gives you the 10 most influential people on the world's most popular socnet. Granted: "God," "Party People," and "You" were cop-outs. Didn't Time do that last thing already?

Last FB hit and we'll leave it alone. eMarketer forecasts that Facebook mobile ads will hit $1.2B by 2014—happy news for the socnet, which is still taking a beating on Wall Street. Not in on the Facebook mobile game? Wipe those eyes, it's still Christmas at 'Profs. HubSpot's released a free e-book on using Facebook for mobile marketing.

Current TV changes nationalities. Al Jazeera's bought a new bauble: Current TV, the founders of which include Al Gore. This gives "the pan-Arab CNN" a gateway into American living rooms: Current is in 60 million of 100 million US homes with cable or satellite service, and its website was a transmedia hitmaker at one point. Al Jazeera plans to use Current to launch the Al Jazeera America channel, entirely in English. As for Current? Some staffers may remain, but its show schedule will likely melt away by springtime.

Smart light: the future of user interface? Google Creative Lab and BERG created a series of videos suggesting what the Google experience of the future may be like. One possibility is a project called "Lamps," which uses "smart light" to bring disconnected objects to life around you—liberating your Google experience from the tyranny of your computer. Did you just shiver? Because we just did. the Google may be in the couch...

Speaking of innovation, here's one way Google isn't: Microsoft's complained that Google is making it impossible for Microsoft to integrate a full-featured YouTube app into Windows Phone... which, despite the pretty new design, slips further into smartphone obscurity every day.

And while we're on the topic of YouTube, this is really cool: YouTube's working with TV and mobile manufacturers to create a button that lets you send videos you're watching to your TV. The world's finally come full circle!

And for you number-crunchers out there, we wrap up with a whopping 102 compelling social media/online marketing stats and facts for 2012-2013. Impress watercooler buddies with well-dropped ditties: 28% of the workday is spent on interruptions and recovery time. Only one-third of midsize US businesses use social to engage with customers. But, worldwide, a whopping 86% of companies have a Facebook and Twitter presence; meanwhile, just over half use YouTube and LinkedIn...