Recession Bottoming out: Conference Board

After having fallen steadily since reaching a peak in July 2007, The Conference Board Leading Economic Index (LEI) for the US has increased sharply in the last four months, with widespread strength among its components.

As a result, the six-month growth rate in the index has accelerated to its highest rate since the middle of 2004, the Conference Board reported.

Meanwhile, the decline in The Conference Board Coincident Economic Index (CEI) for the US has gradually moderated in recent months, while Lagging Economic Index (LAG) remain unchanged.

The US Leading Economic Index (LEI)

The Conference Board LEI for the US rose again in July, increasing 0.6%—its fourth consecutive increase.

The six-month change in the index was +3.0% (a 6.2% annual rate) in the period through July, with eight out of ten components advancing (diffusion index, six-month span equals 85%); that's up substantially from -2.8% (a -5.4% annual rate) for the previous six months; moreover, the strengths among the leading indicators have grown more widespread in recent months. 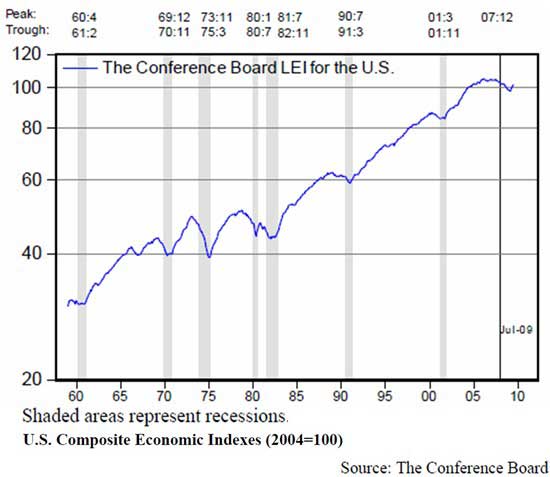 Six of the ten indicators that make up The Conference Board LEI for the US increased in July:

Based on revised data, this index increased 0.8% in June and increased 1.2% in May.

The US Coincident Economic Index (CEI)

The CEI was unchanged in July, after decreasing in the previous eight consecutive months. Index levels were revised slightly lower in recent months as a result of downward revisions to personal income.

Three of the four indicators that make up The Conference Board CEI for the US increased in July:

The US Lagging Economic Index (LAG)

(Meanwhile, real GDP fell at a 1.0% annual rate in the second quarter, following a contraction of 6.4% annual rate for the first quarter of the year.)

One of the seven components of the LAG advanced, five retreated, and one remained unchanged:

Based on revised data, the lagging economic index decreased 0.7% in June and decreased 0.6% in May.