Animated ads are the fastest-growing and most-effective mobile ad format among both brand and direct-response focused campaigns, enabling marketers to tell a more complex message without the necessity of a click, according to a study from Quattro Wireless.

Across ad types, animated ads (sequential GIFs) generate a 63-point performance lift (measured in click-throughs) over standard banner ads and are over twice as effective as standard text ads, according to Quattro's data.* 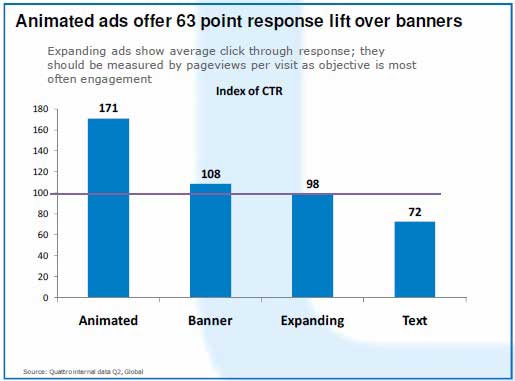 Expanding ads show average performance for click-through (index of 98). However, since they are really mini-websites, the audience does not need to click through to the ad to another site to engage with the brand, according to Quattro. Depending on the creative, they can be measured by pageviews, video views, send-to-friend, and other actions––which are a more accurate reflection of their performance than click-through rates.

Below, other findings from Quattro's The Mobile ROI Report for Brands.

Overall, smartphones drive a disproportionate volume of media use and thus generate the highest volumes of ad impressions.

The iPhone and the Ipod Touch drive the highest percentage of ad requests, followed by the Samsung SCH-R450 and the T-Mobile Sidekick.

Although the RIM Blackberry Curve is the most widely sold smartphone in the US, it ranks fifth in terms of ad requests, according to Quattro Network data. 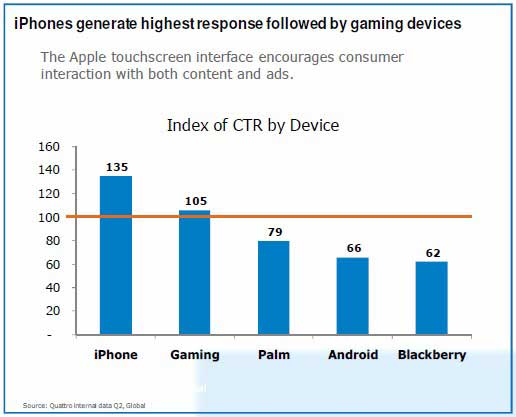 Engagement with the device and quality of the overall experience influence response: As Blackberry improves its browsing capability, and as more Android devices launch, it's likely that both devices will generate stronger engagement demonstrated by higher click-through levels, Quattro Wireless forecasts. 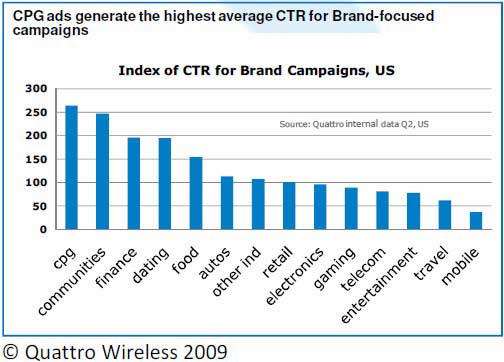 On the mobile platform, these marketers are often using ads to drive a response. Typical ads include click to coupons or recipes, or click to specific information about mortgage rates or loans.

The pool of advertisers turning to mobile to drive direct response include areas such as auto (drive to dealer locator), CPG (couponing), entertainment (driving consumers to iTunes to buy music and TV episodes), and food (Papa John's is selling pizza via mobile phone).

Some advertisers are running brand campaigns with highly targeted media and rich media executions, which they augment with cost-per-click (CPC) campaigns to gain efficient reach and insights from direct-focused messaging.

Just as with brand marketing, the campaigns with the highest levels of targeting––auto, finance, telecom, and food––tend to pay the highest relative prices (CPCs).

Entertainment and gaming ads generate the highest click-through rates among direct-response campaigns, likely due to the creative objective and the suitability of the mobile environment for these adverting types. 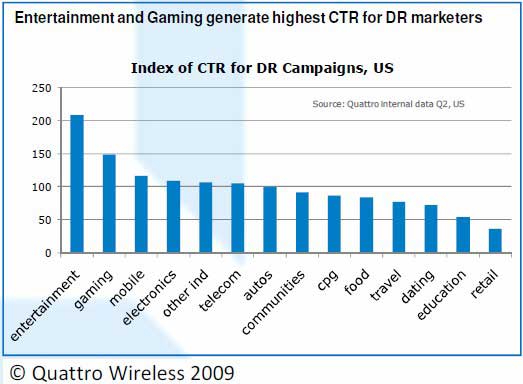 * The data are provided as indices (100 is the average and performance is judged either below or above the average).

About the data: Compiled by Quattro Wireless, a global ad network, data are based on the analysis of over 4 billion ads sold and served to mobile devices globally per month during the second quarter 2009 via Quattro's network.