Despite the residual signs of the economic recession in 2010, marketers have some reason to be optimistic: 53% of marketing professionals say their salaries have increased in 2010 from a year earlier, according to the annual salary survey from the American Marketing Association (AMA) and Aquent.

However, nearly two in five surveyed marketers (38%) say although their compensation has increased in 2010, that increase has been less than 10%. 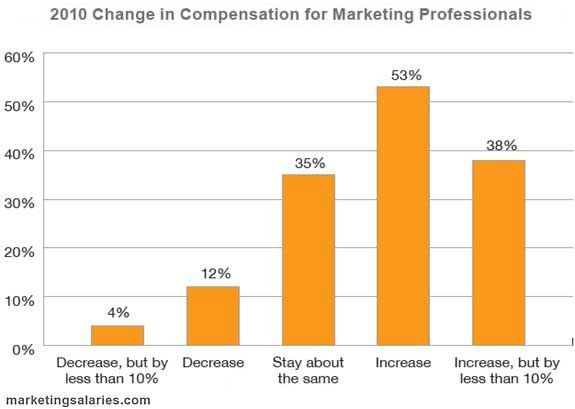 Below, other findings from 2010 Trends in Marketing: Salaries, Strategies, and Beyond, by the AMA and Aquent.*

Along with compensation levels, marketing budgets have also edged up slightly: 38% of marketers say their 2010 budget is larger than it was last year; 30% say their budget has dropped below 2009 levels.

Still, many marketers are skeptical they can meet their 2010 marketing objectives: Only 16% strongly agree they have the necessary staff for meeting their organization's marketing objectives; 58% say they are unprepared given the resources they now have.

And only 15% of marketers strongly agree their teams are well-equipped to handle new trends and technologies that affect their business.

Confidence in general is also waning: Only 32% strongly agree their marketing strategy can make a positive financial contribution to their organization in 2010.

Social media and social networking were used by roughly half of all marketers in 2009 and that level is increasing in 2010: 80% of marketers say they will increase their focus on social channels in 2010—and nearly two-thirds (64%) plan to use mobile media. 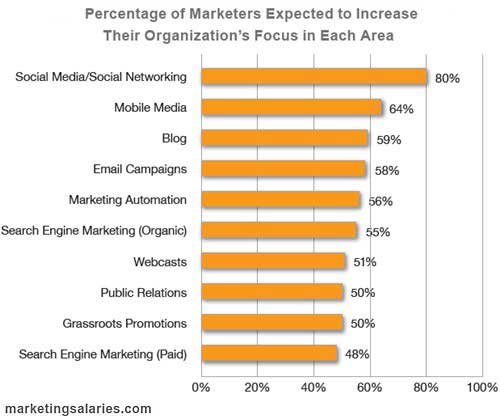 Marketers expect to devote fewer resources to many traditional media vehicles in 2010, as follows:

Six out of ten marketers (60%) say 401(k) contributions, or something similar, are part of their compensation package—the single most common component outside of base salary (95%). 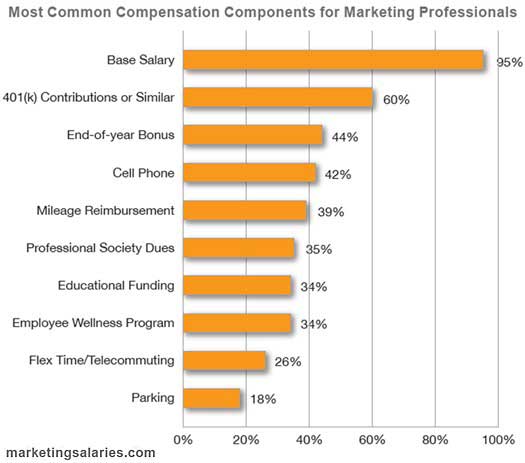 Despite difficult times, 44% marketers say they received an end-of-year bonus and 40% count a cell phone as part of their organization's compensation plan.

Some 26% say they have a telecommuting arrangement.

Adding flexibility to the work environment via flextime was rated as the perk that would have the greatest positive impact on job satisfaction: Nearly one-half of marketers rated it so.

Another 31% of marketers cited "clear opportunities for advancement" as the single most important element driving job their satisfaction.

That component is even more important to those age 30 and younger: 40% of such marketers say advancement opportunities are the biggest driver of their job satisfaction, outside of compensation.

Webinars are the most popular resource for professional development in the marketing community: 50% of marketers say they attended live webinars in 2009, and 29% took part in a pre-recorded, on-demand webinar.

Association websites are also a popular source of marketing information: 48% used such sites to educate themselves in 2009, followed by whitepapers (35%) and online videos (30%).

*The Aquent/AMA survey results can be accessed via an interactive tool that lets marketers choose a job position and a geographical location across the nation to find out what people are earning.

About the data: Findings are from a survey of 5,298 marketing professionals, ranging from senior-level executives to entry-level marketers, from companies of various sizes and industries. The survey was conducted from April 13 to May 17, 2010 by Inavero for Aquent and the American Marketing Association (AMA).