Most top-brand online retail marketers ignore signs of inactivity among their email subscribers, and continue to send email messages at steady and frequent rates, despite their subscribers' lack of response (no opens, clicks, or purchases), according to a study by Return Path.

That finding is based on an analysis of 40 online retailers that sent email messages to non-responsive subscribers—one-time buyers, who after their initial purchases, did not open, click, or buy again during a 19-month study period.

During the first three months after signing up for email, subscribers received an average of 10 emails per month from each company included in the study. Thereafter, the average level ranged from 9 to 11 emails per month—despite no responses from subscribers.

There were exceptions to that pattern: The Container Store, though continuing to send email, slowly and consistently decreased frequency with each passing month, presumably recognizing the growing gap in time since the subscriber's last action.

But more commonly, retailers ignored subscribers' inaction: Neiman Marcus, for example, sent more than one email per day in the first three months (almost eight per week), decreased to five to six per week for six months, and then increased to one per day again—all with no response from the subscriber.

Moreover, throughout the study period, none of the online retailers studied explicitly offered the option to change preferences for content or frequency.

Below, other findings from Return Path's study, The One-Way Conversation: Email Marketing to the Non-Responsive Subscriber.

Only 12.5% of online retailers (5 out of 40) sent at least one win-back message to a lapsed subscriber. Among those win-back efforts:

Among the online retailers studied, Bed Bath & Beyond had the most complete email win-back strategy, in which they identified inactive subscribers on file and decreased the frequency of emails to those subscribers over time (from seven emails per month down to roughly five per month, and eventually to less than one).

After one year of inactivity, Bed Bath & Beyond sent a clear win-back message with a discount offer for an item of the subscriber's choosing: 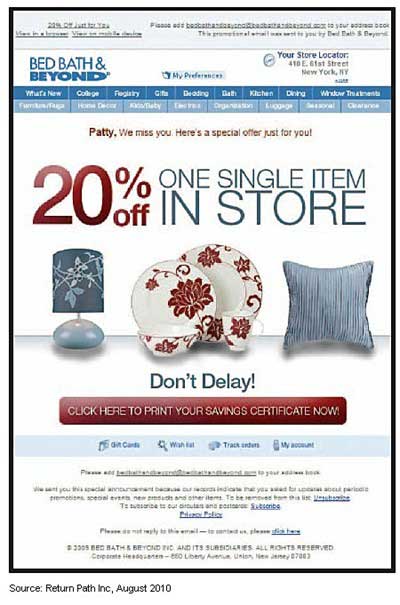 A week after that win-back campaign, the company sent a repermission email specifying a date when they would stop sending email unless they received subscriber permission: 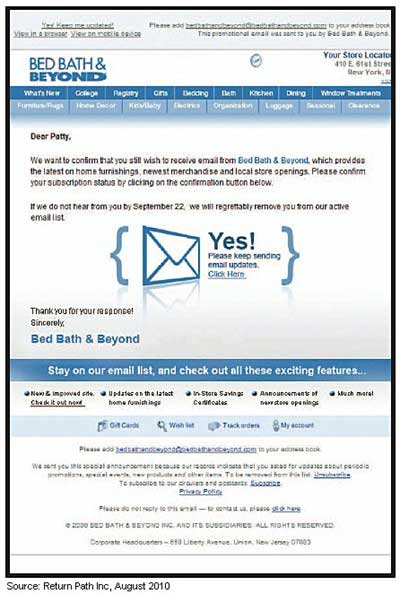 When Bed Bath & Beyond received no response to the repermission email, they honored their commitment and stopped sending emails.

Eventually, 27% of online retailers (11 out of 40) stopped sending email to non-responsive subscribers. But 10 of them did so without making any attempt to reengage the customer, or explicitly asking the customer whether they'd like to continue receiving emails.

Best Buy and Borders both stopped sending messages after one month. Four other companies stopped sending emails after receiving no responses within 14 to 19 months, while the remaining did so between five and 10 months after the initial purchase.

"There is a widespread perception that email is free," said Bonnie Malone, director of Professional Services, for Return Path. "But that is not true—most retailers pay a 3 to 5 cent CPM to service providers to send email, which sounds small but really starts to add up when you consider that these lists can include hundreds of thousands of emails."

"Continuing to send to addresses that never respond is a waste of money and leads to deliverability problems that erode the program's effectiveness. Taking all this in to account we think that marketers and publishers need to make win-back programs an essential part of their program strategy."

About the data: For the study, Return Path researchers made a single purchase from each of 45 online retailers between September and December of 2008, signing up for the marketer's email program during the online transaction process. The email accounts used for making purchases and signing-up to emails program were kept open and none of the emails subsequently received were opened or clicked on. Return Path studied the emails sent by marketers following sign-up until the end of month 19. Five companies sent no promotional email at all to their former buyer, and so were not included in the study.