Got Social Strategy? One-Third of Brands Do

Social marketing is growing up: Not only have activity levels across social communities risen, but the number of brands now applying more focused and disciplined approaches to their social media communities has increased significantly over the past year, according to a study by ComBlu.

Among four defined stages of social media participation, nearly one-third of brands (25 out of the 78 studied) have a cohesive strategy for social engagement, compared with 20% who did so a year earlier. Such brands have a solid social media approach, with multiple activities rolling into a single online experience, according to the study. 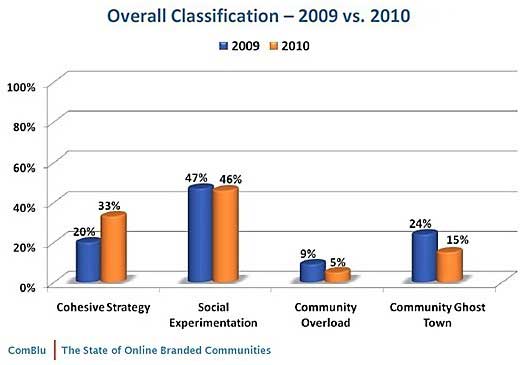 Below, other findings from the second annual "State of Online Branded Communities," which explores 241 social communities among 78 major corporations.

Branded communities are doing a better job integrating proprietary community sites with other social assets such as Facebook, Twitter, and YouTube. In fact, the use of strategically aligned engagement tools grew to 76% of online communities in 2010, up from 28% in 2009. 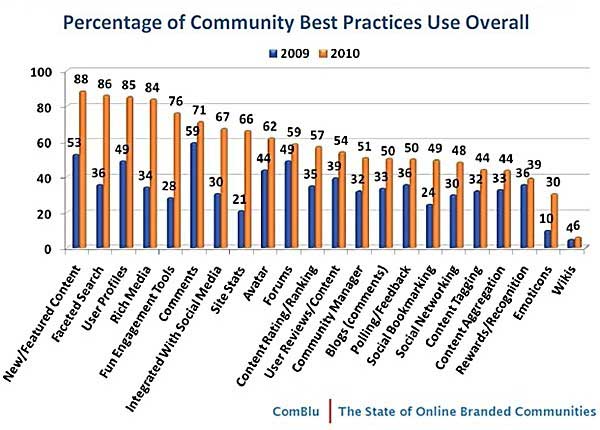 Key trends among the communities studied include:

Many brands are still missing opportunities. For example, brand advocates are being ignored: Only 20% of communities have an advocate or expert group, that represents the "voice of the customer," contributes content, and helps recruitment.

In addition, only 40% of the communities offer rewards or recognition programs, considered key drivers for sustaining participation.

Communities with the highest activity levels tend to focus on a specific need or interest, ComBlu finds. Despite creative engagement tools, those with no clear mission have less activity, overall.

Gaming (100%) and entertainment (89%) industries have the most active communities, followed by insurance (67%), technology (67%), and telecom (67%). With the exception of insurance, those industries are also the highest scoring overall (i.e., higher use of best practices). 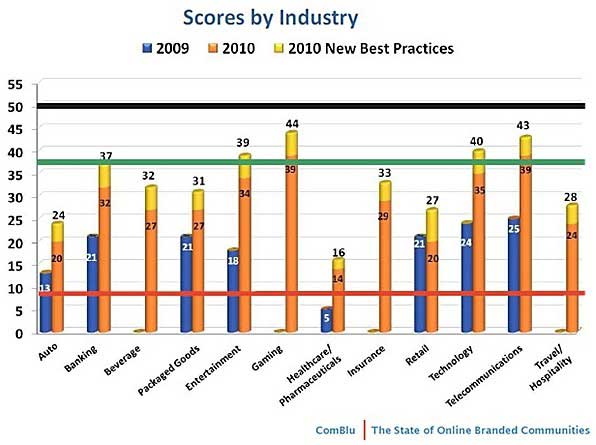 The most improved industries from 2009 to 2010 are entertainment, telecom, financial services, and technology.

Across the 12 industries analyzed, the following companies are the highest performers:

A detailed analysis of the 75 brands studied is available.

About the data: The audit of 241 online branded communities among 75 US companies was conducted by ComBlu from July to August, 2010. Each site was analyzed against 22 community best practices. A separate scorecard was used for the 2010 study to track adoption of an additional ten best practices. None of the companies were aware that their sites were being analyzed, and ComBlu did not contact these companies prior to the analysis of the data it collected.