More than 70 million US mobile users—roughly 30% of all mobile subscribers—accessed email  via mobile device as of November 2010, up 36% from the 51.6 million who did so a year earlier, according to comScore Media Metrix. Meanwhile, fewer visited Web-based email destinations during the period, and spent less time on such sites when doing so.

Moreover, some 43.5 million mobile users accessed email via mobile on a nearly daily basis as of November, up 40% from the 31.2 million who did so in the same period a year earlier. 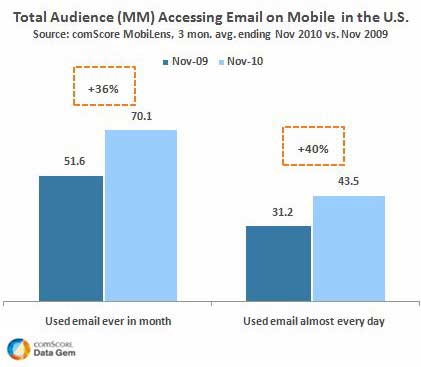 Below, other findings from comScore's report on mobile and Web-based email use, comparing three-month averages ended Nov 2010 with those ended Nov 2009.

Shifts to Mobile Communications, by Age and Gender

Accessing mobile email increased by double-digits across all age segments, with two younger age groups showing the highest propensity to access email via mobile: Adults age 25-34 were 60% more than likely than mobile users on average to access mobile email; those age 18-24 were 46% more likely to do so. 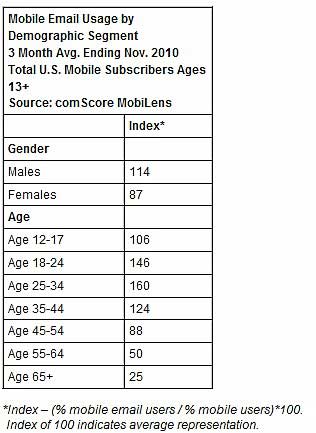 Overall, men were 14% more likely to be users of mobile email.

Some 153.4 million online adults visited Web-based email providers as of November, down 6% from the 162.9 million who did so in the previous year. Meanwhile, the number of minutes spent on email sites declined 9% during the study period, while total pages viewed fell 15%. 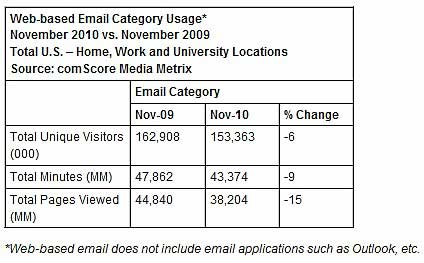 Despite such declines, however, email is still among the most popular activities on the Web, reaching more than 70% of the US online population each month, comScore notes.

Email Communications, by Age and Gender

Email use among the young fell most dramatically: The number of people age 12-17 visiting Internet-based email sites declined 24%, while engagement fell by one-half, with total minutes down 48% and total pages down 53%.

By contrast, email use increased among those age 55 and older: The number adults age 55-64 accessing Web-based email increased 15% with similar gains in engagement, while those age 65+ registered gains across all three metrics.