In an environment saturated with new and evolving media platforms, TV is still king: 71% of Americans rate watching TV on any device among their favorite media activities, according to Deloitte's annual survey on technology and media.

Meanwhile, the use of smartphones and social networking continues to increase as consumers turn to the social Web to help them shop.

TV viewing varies by generation, with older adults the most enthusiastic, according to Deloitte's State of the Media Democracy study: 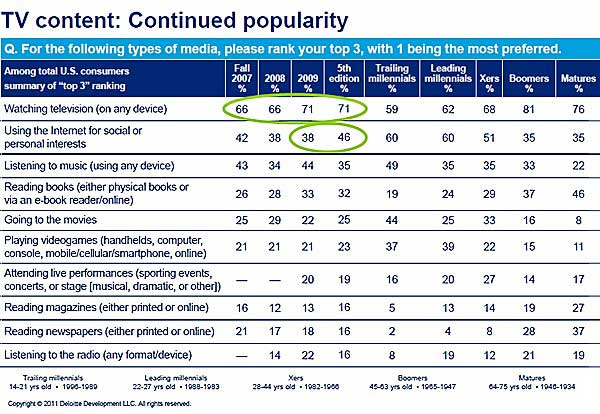 More Americans are using the Web: 46% say they use the Internet for social purposes, up from 38% in 2009), as do 60% of Millennials.But fewer Americans are listening to music: 35% say they do so via any device, up from the 44% who said they listened to music a year earlier.

Below, other findings from the fifth edition of Deloitte's State of the Media Democracy survey.

Nearly three-quarter of consumers (74%) say they have used a home TV system to watch their favorite TV shows in the previous six months, but online viewing of such programming is growing: 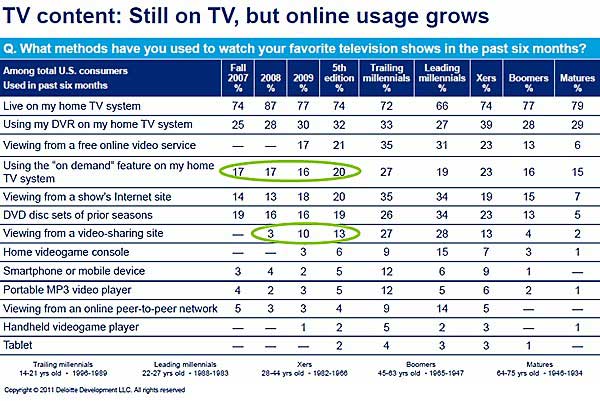 Training Millennials (35%) and Leading Milllennials (34%) surpass other groups in watching programs via a show's website.

Web, mobile and social channels are changing the TV viewer experience: 74% of consumers say they multitask while watching TV; among them, 42% browse online, 29% talk on cellphones or mobile devices, and 26% send instant messages or text messages.

Nearly nine in ten consumers (86%) say TV advertising has the greatest influence on their buying decisions. Online ads are the second-most influential (50%), followed by magazines (46%). 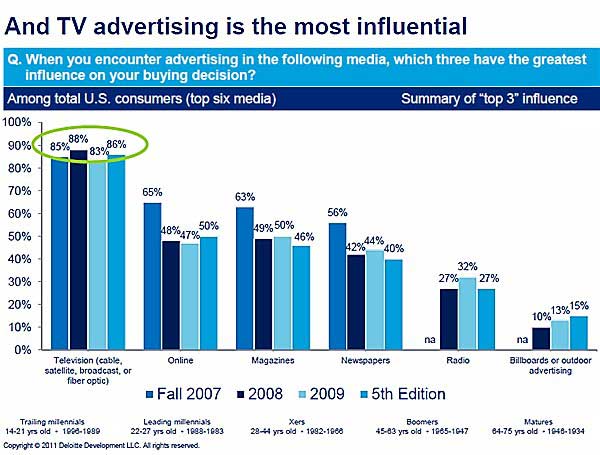 Fully one-third (33%) of American households now own a smartphone, up from 28% a year earlier, and up from 11% in 2007. Ownership is higher among Leading Millennials: 54% of that cohort owns a smartphone.

Such growth is likely to continue: 20% of consumers who don't own a smartphone are very/extremely interested in purchasing one in the near future.

Moreover, smartphones are valued more than ever: 17% of those who own a smartphone rate it as the device they value most, up from the 6% who said so in 2008. 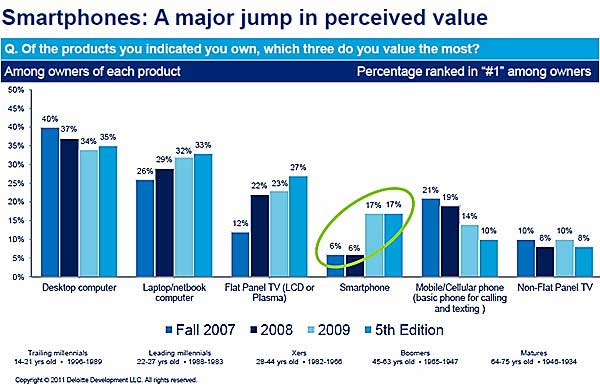 About the survey: Deloitte's fifth edition State of the Media Democracy survey was conducted from Sept. 10 to Oct. 8, 2010. The online survey polled nearly 2,000 US consumers age 14-75.