The second-quarter results were slightly below the $3.17 billion raised by social media companies in the previous quarter. But  1Q11 results were inflated by the $1.5 billion Facebook raise in January, as well as a $950 million raise by Groupon. 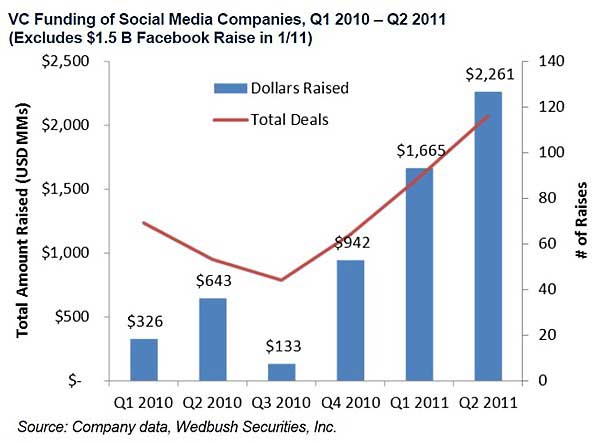 Below, other findings from Wedbush Securities' report titled, "The Second Internet."

Among other results from the second quarter of 2011:

Below, a list of second-quarter social media investments that exceeded $50 million, which together amounted to $1.5 billion—or roughly 68% of total amount ($2.3 billion) raised in the quarter:

After excluding raises of $100 million or larger, average deal size for second quarter was $10.8 million, up from $8.1 million in the previous quarter.

The future looks just as bright. Even given such financial hyper-activity, emerging social companies, or "Second Internet" ventures are changing the world to a far greater extent than Wall Street currently appreciates, Wedbush notes.

For the foreseeable future, the financial activity related to Second Internet companies will likely be very positive.

About the data: Findings are based on research conducted by Wedbush Securities.