CMOs: Budgets, Hiring Up; Optimism Down

Despite a lack of confidence in the overall US economy, CMOs are planning to increase spending on all forms of marketing over the next 12 months, particularly the share of budget allocated to social media marketing, according to The CMO Survey.

In addition, surveyed CMOs now report their companies are planning to increase spending on marketing hires 7.2% on average over the next 12 months.

"These results show that while executives feel the fear of all the doomsayers operating in financial markets, these same executives are reporting positive performance gains and are spending despite the negative news," said Christine Moorman, T Austin Finch senior professor of Business Administration at Duke's Fuqua School of Business and the director of The CMO Survey.

"It is important to note that the company performance indicators collected in the survey show companies are holding on to their profit, revenue, and ROI gains witnessed over the last six months."

Below, additional findings from the August 2011 CMO Survey, a nationwide poll of senior marketing executives conducted biannually by The American Marketing Association and Duke University's Fuqua School of Business.

Among surveyed CMOs, social media spending is expected to account for 10.1% of marketing budgets over the next 12 months, up from 7.1% in August 2011.

Moreover, in the next five years, social spending is projected to climb to 17.5% of total marketing budgets. 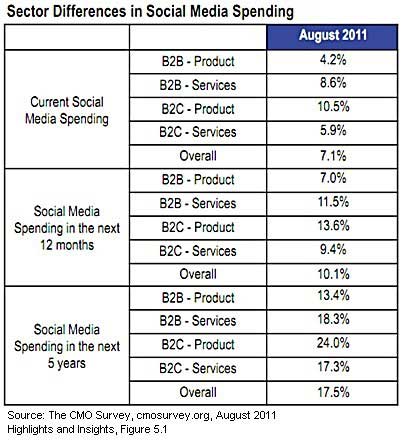 B2C brands that sell products and B2B brands selling services are expected to invest the biggest share of their budgets to social media over the next five years:

Integration of Social Media Into the Strategy

On a scale of 1-7, with one being "not integrated at all" and seven being "very integrated," nearly one-quarter of CMOs (22.3%) selected "1" to describe how well their company integrates social media with the firm's overall strategy, whereas 9.1 rated their efforts a "7", or very integrated. The average was 3.4. 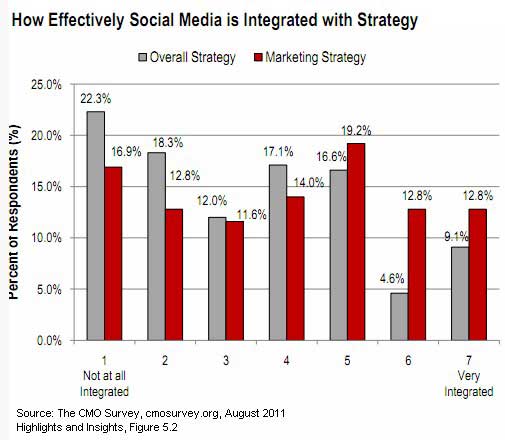 Overall marketing budgets are expected to climb 9.1% on average over the next 12 months, up from the 6.7% reported in February 2011: 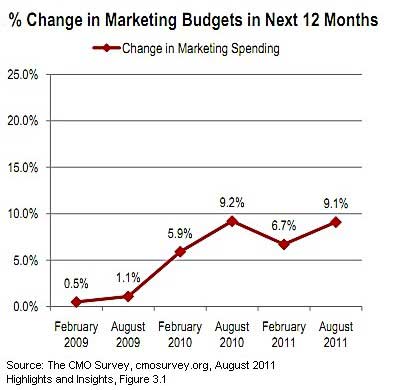 Various marketing categories are expected to grow more robustly over the next 12 months, including: 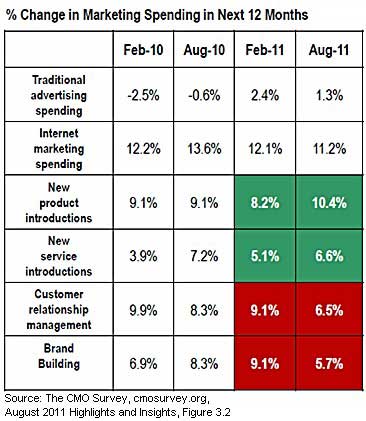 CMOs plan to allocate fewer dollars to customer relationship management efforts (6.5%) and brand building (5.7%) over the next 12 months.

On average, companies are planning a 7.2% increase in marketing hires over the next 12 months.

The largest percentage changes in marketing hires are expected among B2B products companies (11.6% plan to hire in the next 12 months) and smaller companies with revenues of less than $25 million (14.8% plan to hire over the same period).

Optimism at a Two-Year Low

Optimism among CMOs for the overall US economy has reached its lowest point in two years.

Asked how optimistic they are about the overall US economy on of 1-100 scale with 0 being the least optimistic and 100 the most optimistic, the average among CMOs was 52.2. By comparison, in February 2009 the average was 47.6.

About the data: The August 2011 CMO Survey is a nationwide poll of chief marketing officers conducted twice each year by Duke University's Fuqua School of Business in conjunction with the American Marketing Association. The survey collected responses from 280 senior marketing executives, August 1-23, 2011.