Some 81% of all permission-based commercial emails worldwide were delivered straight to recipients' inboxes in the first half of 2011, while the balance of messages (19%) either fell prey to spam or junk folders (7%) or simply went missing (blocked by ISP-level filtering) (12%), according to a report from Return Path: 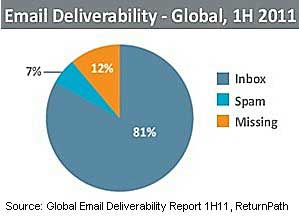 Email performance in North America was stronger, recording an 86.01% inbox placement rate (IPR) for permission-based commercial emails in 1H11, with the remaining 14% of email messages not reaching the inbox, either marked as junk  (5.62%) or going missing (8.35%).