IT, Marketing More Critical to Business Strategy in 2012

Despite continued business volatility, global executives plan to increase corporate spending cautiously in 2012—particularly the areas of IT (information technology) and marketing—according to a survey conducted by Doremus and the Financial Times. 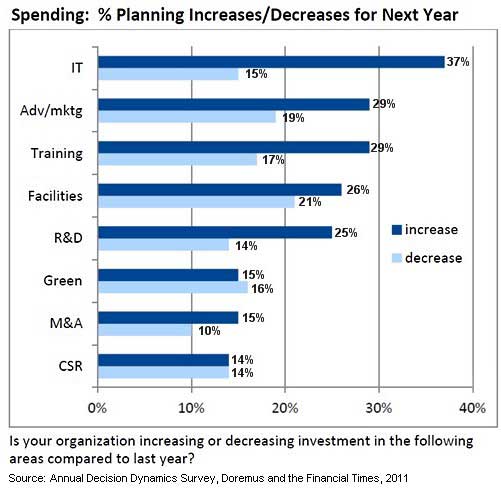 Fully one-quarter (25%) of companies are increasing spending on R&D (research and development), while 15% are upping their spend on green investments (vs. 16% decreasing spend in that category).

Below, other findings from the eighth annual Decision Dynamics survey among global senior executives, conducted jointly by Doremus and the Financial Times.

Given such planned investments, surveyed executives view various suppliers as becoming more critical to their business strategies over the next 1-2 years.

Software vendors are expected to register the greatest net increase in importance (26%) to business strategies, followed by advertising and communications services (23%) and computer hardware (11%) providers. 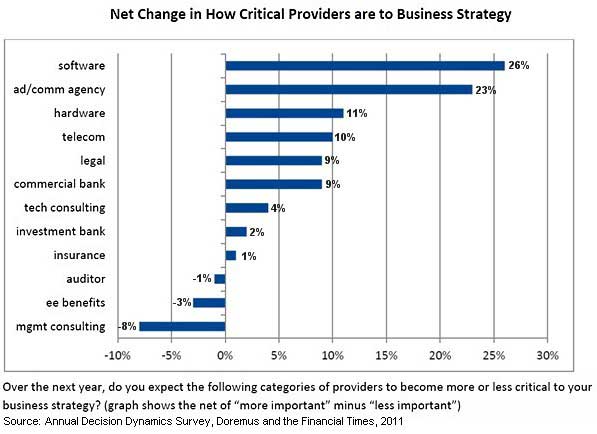 Management consulting is the only supplier category now viewed as less important to businesses by a significant margin (-8%).

Among nearly one-half (49%) of executives, the top corporate objective for 2012 remains the same as last year: cost containment and improving efficiencies. Corporate growth, via improved market share, is a close second with 48%, followed by developing and/or marketing new products and services (41%). 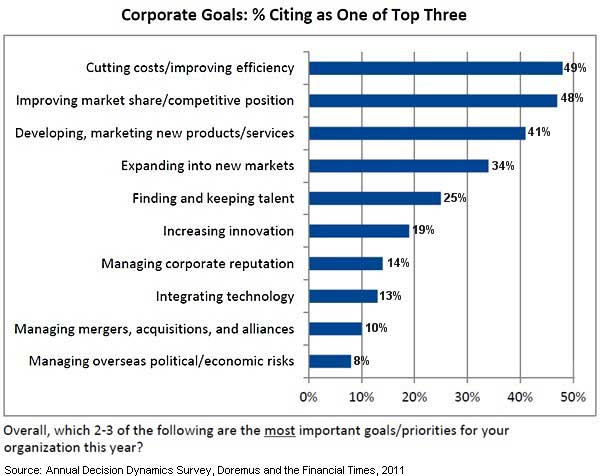 Expanding into new markets (34%) and finding and keeping talent (25%) round out the top five goals, although well behind the top three.

Overall, executives are only slightly more optimistic about the global and local economics than they were in 2008, and they have the same level of optimism regarding their industries and companies. 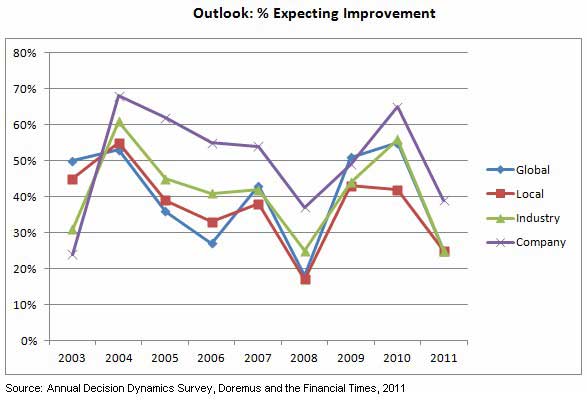 North Americans are noticeably less pessimistic about the local economy and their industries than either Europeans or Asians: 37% of North-American execs expect a decline in their local economies, compared with 61% of European execs and 62% of Asian execs.

Nearly one-half (49%) of global execs do not believe the economy will recover until or after 2013.

Looking specifically at their own companies, 25% of North-American execs expect a decline over the next six months, compared with 29% of European and 36% of Asian execs.

About the data: Findings from the annual Decision Dynamics report are based on a survey of 628 senior executives, representing a mix of company sizes and industries from North America, Europe, and Asia, conducted in October 2011.