Digital Natives, consumers who grew up with mobile technology, subconsciously move between devices and media platforms (e.g., TV, tablets, and smartphones) far more frequently than Digital Immigrants, those who learned about mobile technology in their adult lives, according to a study by Time Inc.

The new report highlights the challenges for content creators and marketers in engaging younger audiences, raised on a diet of modern, multi-platform media.

Below, additional findings from the study titled "A Biometric Day in the Life" conducted by Innerscope Research for Time Inc. 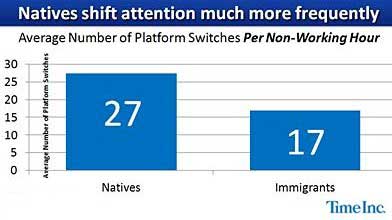 As soon as they grow tired or bored, Digital Natives turn their attention to something new, effectively using media to regulate their mood. Digital Immigrants are intuitively linear—they want to see a beginning, a middle, and an end to a story, according to the report.

For Natives, stories still need a beginning, middle and end. However, Natives will accept a story in any order. Because Digital Natives are subconsciously switching between platforms, they can pick up different pieces of a story from different mediums in any order.

"This study strongly suggests a transformation in the time spent, patterns of visual attention and emotional consequences of modern media consumption that is rewiring the brains of a generation of Americans like never before," said Dr. Carl Marci, CEO and chief scientist, Innerscope Research.

"Storytellers and marketers in this digital age will continue to face an increasingly complex environment with a higher bar for engaging an audience of consumers."

About the research: For the study, 30 participants (15 Digital Natives and 15 Digital Immigrants wore biometric belts, which measured their emotional engagement throughout their normal day, and point-of-view glasses with embedded cameras that monitored which medium or platform they were using and when they altered their visual attention. The study was conducted over the course of 300 hours during the fourth quarter of 2011.