Most brands and ad professionals say video advertising should be more aligned with TV rather than online display, and 48% are already planning TV and video together, according to a survey from Adap.TV and Digiday. 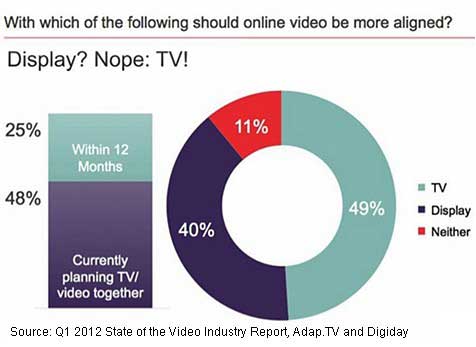 Moreover, in addition to those 48% of brand and ad professionals who are planning TV and online video together in 2012, another 25% expect to do so over the next 12 months.

Below, additional findings from the Q2 2012 State of the Video Industry Report, by Adap.TV and Digiday.

More than six in ten (62%) brands and ad professionals say their use of online video is more likely to be a complement to TV; 10% say video campaigns have replaced TV; and 28% say the medium is "neither" a complement nor a replacement (i.e., it stands on its own). Building the brand is most important

Nearly three-quarters (73%) of brands and ad professionals cite brand building as their main objective with online video marketing, up from the 68% who said so a year earlier.

Optimism is healthy, CPM is up Publishers are also bullish: 80% report CPMs have increased 11%, on average, over 2011 levels, and fill-rates are up 14% over the same period.

Similarly, publishers are optimistic: 26% say they plan to ramp up connected TV inventory availability over the next 12 months, up from 17% who said so a year earlier.

Advertisers are shifting to programmatic buying

Asked how they source their video ad inventory, most (73%) advertisers cite ad networks.

However, more advertisers are sourcing via other, automated environments:

About the data: This survey was conducted in late March and early April 2012 among Digiday subscribers, conference attendees, and speakers who describe themselves as digital media and marketing professionals. Among the 638 respondents, 43% were from agencies, 25 from publishers, 19% from ad networks and DSPs, and 13% from brands.