Bing-powered searches—those served by Bing.com and search.yahoo.com—accounted for 30.01% of all US searches conducted in the four weeks ended April 28, 2012, up 5% from the previous month and 11% from the previous year, according to data from Experian Hitwise.

The remaining 65 search engines in the Hitwise Search Engine Analysis report accounted for 6.51% of US searches.

Searches of one-word comprised the plurality of searches, some 28.63% of all queries as of April, up 19% from the previous year. 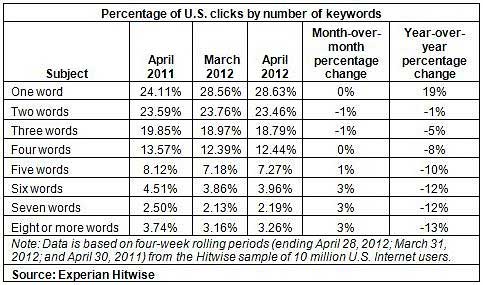