Driven by the need to save money during the economic downturn, consumers have been revoking their allegiance to brands in the past two years, and many have opted for cheaper brands across a variety of product categories, according to a new study from comScore.

Brand Loyalty Diminishes Across All Product Categories and Segments

As the economic downturn has continued, the percentage of shoppers who typically buy brands they want most has steadily declined. In March 2010, less than 50% of shoppers reported purchasing the brand they wanted most. 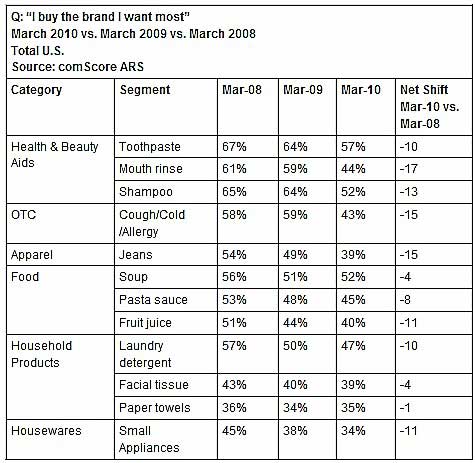 In some categories, particularly CPG household products and housewares, consumers were already more likely to buy a brand they didn't "want most" at the start of the recession. For example, in March 2008 just 43% of consumers reported buying the facial tissue brands they wanted, and just 36% bought the brand of paper towels they wanted.

Those categories (paper towels, facial tissue) have not recorded increases in trading down from a brand perspective, possibly because such categories have led the way in tiering, allowing consumers to stick with their preferred brand at a more attractive price point.

However, as the economic downturn persists, such trading-down behavior is spreading to categories that were previously immune (e.g., health and beauty aid, over-the-counter medicines). Increases in trading down in those categories have largely occurred in the past year.

Higher-ticket items, such as apparel, have registered large increases in trading down (15 points in the past two years) possibly due to larger absolute savings on a single purchase.

Consumers were also asked about the type of brand they did buy when not buying their preferred one; the question focused on promotional discounts and lower price as causes of trading-down behavior.

Overall, the drop in likelihood to shop for the brand wanted most is not restricted to buying other brands on sale. Rather, a sizeable percentage of the change in shopping approach is being driven by a decision to convert to less expensive brands to save money. 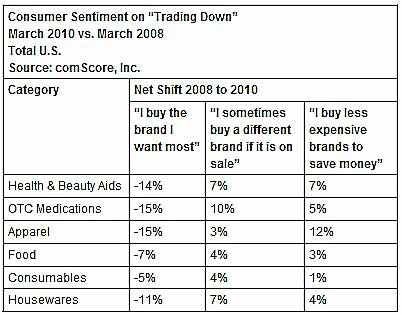 "A decline in loyalty to consumer goods brands is typically one of the byproducts of a recession as consumers give greater consideration to price," said Gian Fulgoni, comScore chairman.

"Despite these shifting consumer dynamics, research has repeatedly shown that premium brands which invest in marketing and promotion activities aimed at maintaining buying at 'preferred' levels are able to minimize short-term erosion of share to less expensive brands and position themselves for a bounce-back when the economy improves."

The US has registered two consecutive years of declining per-capita consumption and that behavior is likely to remain, even after the economy recovers, according to another study. 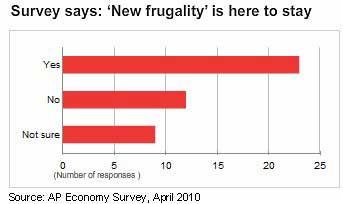 Over one-half (52.3%) of leading economists polled (23 out of 44) in the AP Economy Survey say the "new frugality" born of the Great Recession is likely to persist, even after the economy starts to recover; 12 economists say consumer frugality will not persist after the recession ends; and 9 say they are not sure.