Though most active users of social networking sites say they visit those sites primarily to stay connected with friends and family, many also want to engage with brands: 65% of such frequent social networking users say they are a fan of at least one brand on Facebook and 31% follow a brand on Twitter, according to a survey from Invoke Solutions.

Below, other findings from the report, Hyper Social Networking, which surveyed 314 active users of social networking sites.

In addition, 78% of social networkers mention the site when asked what they associate most with "social networking," whereas 31% mention Twitter.

Facebook has also become a key destination for brand information, especially for Twitter users: 62% of those who follow at least one brand on Twitter and 47% of those who are a fan of at least one brand on Facebook say they use Facebook as a source of brand information. Those figures compare with 38% of all social networkers who say the same about Facebook. 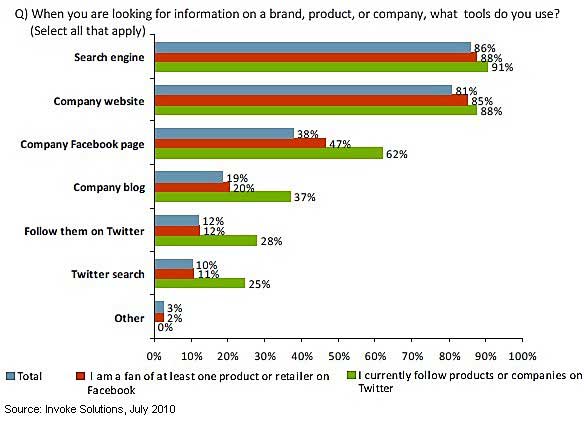 Interestingly, those who follow brands via Twitter are nearly twice as likely as other social networkers to use company blogs to find information (37% vs. 19%)—and fully one-quarter of such Twitter users say they have conducted a Twitter search (25%) or have added a company of interest to those they follow (28%).

Consumers want to be rewarded for interacting with brands via social networks: 60% of Facebook fans cite coupons and discounts as the top reason they follow retailers on Facebook. 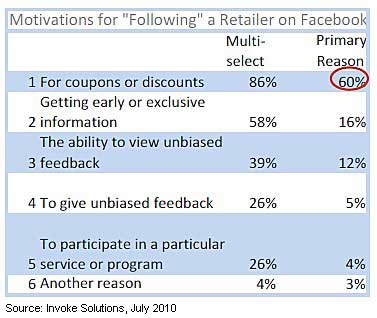 Some 16% become a Facebook fan to get early or exclusive brand information and 12% do so to view unbiased feedback about the retailer.

About the data: Findings are from a survey of 314 adults age 18+ who have at least one active social networking account; it was conducted by Invoke Solutions, June 15-18, 2010.