Female consumers are a powerful force that shape how billions of marketing dollars are spent yearly, and among the most important brands for women are Wal-Mart, Target, and eBay, according to the Women at NBCU Brand Power Index, which measures the top 25 brands most important to women.

The September 2010 Index ranks the top 25 most important brands for women: 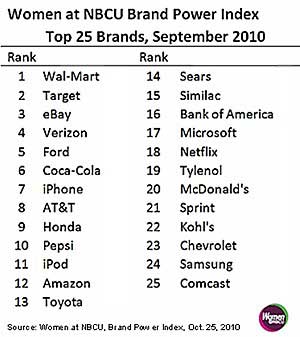 Bayer was among the biggest movers during the month, jumping from its August ranking of 381 to 140 in September, up 241 spots. Bayer's popular "One A Day" digital and social media ad campaign offers female consumers an immersive, customized social experience to benefit their overall health and wellness.

"It is amazing to see how quickly a brand's energy can be elevated by marketing and promotional strategies—even in just a month," said Tony Cardinale, SVP of Strategic Research Insights for NBC Universal Women and Lifestyle Entertainment Networks. "Social media campaigns continue to spark a lot of dialogue and move the needle, and television remains a powerful influence."

Brands with exposure during the launch of the broadcast TV season were some of the biggest movers in September:

Video game systems, which are not usually big brands for women, gained traction in September. The release of "PlayStation Move" for Sony Playstation 3 drove the PlayStation 3 brand up from 304 to 150. This also may have led to more discussion around its competitor, the Nintendo Wii, which moved 11 spots from 78 to 67.

Other big movers this month were brands that offered fun campaigns directed at children and teens:

Female consumers talk about brands constantly—roughly 92 per week, according to separate research from NBCU and Keller Fay.

Moreover, women trust other women to recommend products over all other forms of media, according to the study. Over six in ten surveyed women (61%) say what they hear from other women is credible and believable, and 51% would buy something based on a conversation.