Companies that deliver high-quality customer experiences via new media are rewarded for their efforts, often in the form of higher brand awareness and likelihood to purchase among those who engage, but that loyalty can be hard to find and hard to keep, according to a survey from Cone.

Consumers are more open than ever to engaging with companies via new media: 86% of surveyed new media* users say they interact with brands online, up from 78% who said so in 2009. Even so, new media users still choose to associate with only 4.6 brands on average (via friending, following, or subscribing to RSS feed).

Financial incentives are still biggest attraction for consumers connecting with brands. New media users expect deals and coupons (77%), but also look to brands to help them solve problems (46%) and solicit their feedback on products and services (39%). 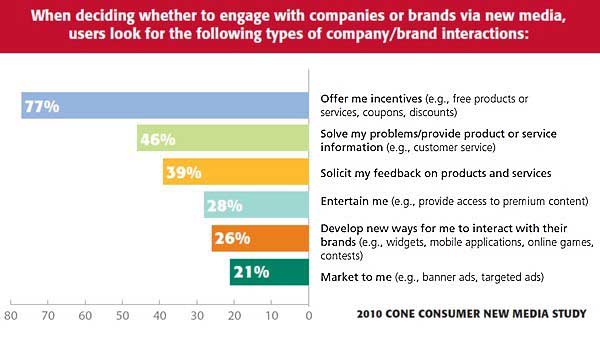 Only 21% of new media users expect to be marketed to via their new media relationships with brands.

Below, other findings from the 2010 Cone Consumer New Media Study.

Most new media users (59%) say they're satisfied with their online experiences with brands, but users won't hesitate to disengage if satisfaction wanes: 58% of new media users will stop following a company if it acts irresponsibly toward consumers and 58% will disengage if a brand over-communicates with them (58%). 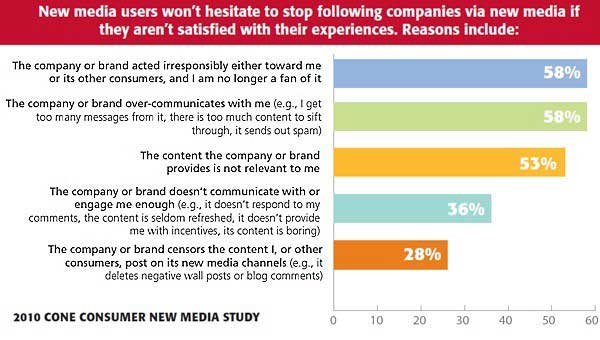 More than one-half of new media users say they'll disengage if brands send them irrelevant content (53%), under-communicate with them (36%), or censor user-generated content (28%). 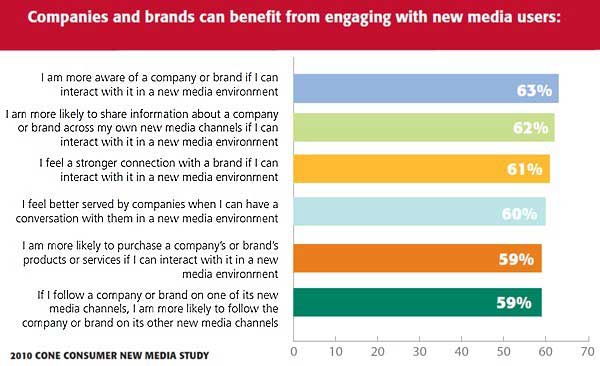 Over three in five (61%) say they feel a stronger connection to the company and 60% feel better served by the brand.

About the research: The 2010 Cone Consumer New Media Study is based on an online survey conducted September 9-10, 2010 by ORC among a demographically representative sample of 1,050 US adults comprising 505 men and 545 women age 18+.