Mobile Web traffic to high-traffic e-commerce sites grew more than 300% during the 2010 online holiday shopping season over levels registered during the same period a year earlier, according to a report by Conductor.

Among some 18 million visits to those five sites from November 1, 2010 to January 1, 2011, visits via mobile devices grew more than 300% over the same period one year earlier. 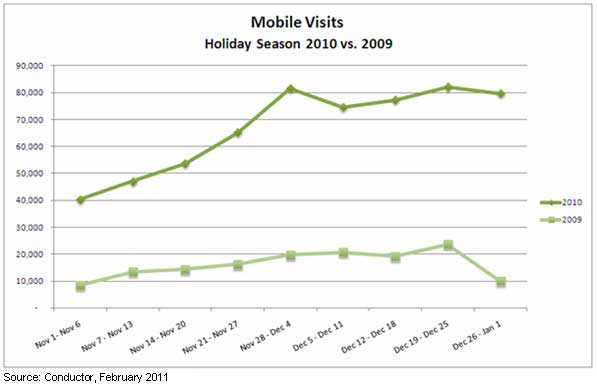 Among the sites tracked, Apple iOS devices accounted for more than two-thirds (67.1%) of visits to e-commerce sites during the 2010 holiday season. 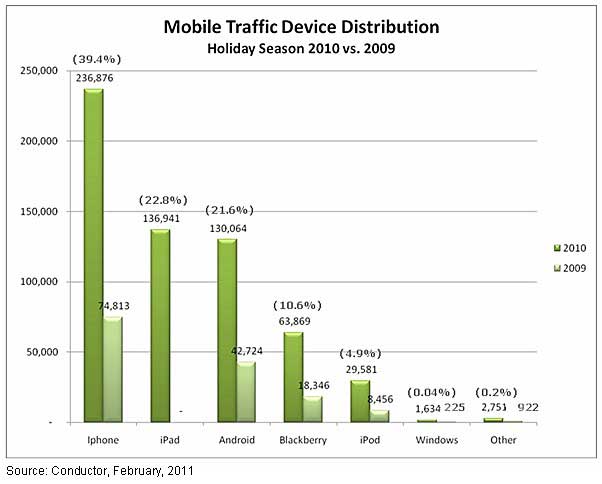 As of December 2010, 47% of mobile subscribers were connected media users as of December—browsing the mobile web, accessing applications, downloading content, or accessing the mobile Internet via SMS—up 7.6 points from the previous year, according to separate research from comScore.

In view of those adoption growth rates, the trend toward mobile commerce is likely to continue, both in the use of mobile devices to obtain real-time price and product information—and in accelerating the shift in spending from offline to online, according to comScore.

About the data: Conductor's mobile findings are based on the analysis of 18 million visits to five high-traffic e-commerce sites from Nov 1, 2010 to Jan 1, 2011. comScore findings are from the 2010 US Digital Year in Review, using data from MobiLens and GSMA Mobile Media Metrics (MMM).