Nearly one-half of US adults (47%) get at least some local news and information via cellphone or tablet computer, and such mobile consumers tend to be young, affluent, and more plugged into digital media and their local communities, according to a survey from Pew. 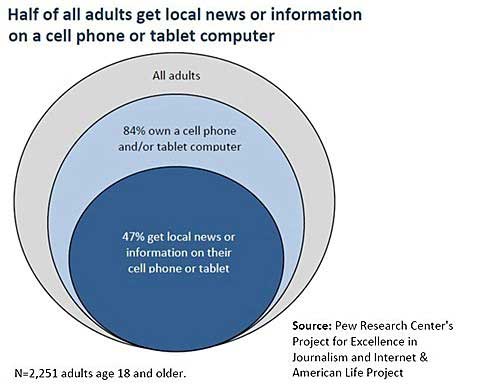 More than eight in ten surveyed US adults (84%) own a cellphone, a figure that has remained relatively stable since mid-2008. Roughly 7% of adults own a tablet computer, but virtually all tablet owners are also cellphone users, so the total population of mobile device owners (cellphone and/or tablet users) is 84%.

Below, other findings from the survey titled How Mobile Devices Are Changing Community Information Environments, issued by the Pew Research Center's Internet & American Life Project and Project for Excellence in Journalism.