Spending on custom content published via digital channels—such as video, mobile, and Web—reached an all-time high of $12.5 billion in 2010, up from $12.1 billion in 2009, according to a new study by the Custom Content Council (CCC) and ContentWise.

Moreover, custom content* delivered via digital channels accounts for a growing share of total content publishing—some 31.2% of total production and distribution spending in 2010, up 5.6 percentage points from 25.6% in 2009. 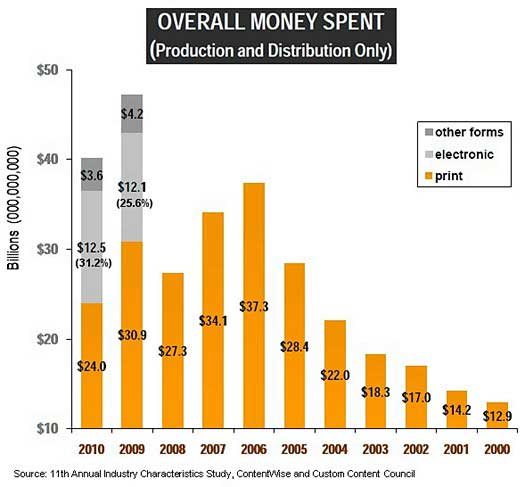 Print production and distribution together constituted $24 billion in total spending in 2010, while some $3.6 billion was spent on other forms of content.

Overall, content marketing accounted for 29% of marketing, advertising, and communications budget budgets in 2010, down from 32% in 2009.

Below, other findings from the 11th annual industry study by the CCC and ContentWise, titled Characteristics Study: A Look at the Volume and Type of Content Marketing in America for 2011, based on a survey of 197 marketers from leading brands.

Surveyed marketers are increasingly using digital forms of content to reach target audiences and cite the following as the most important: 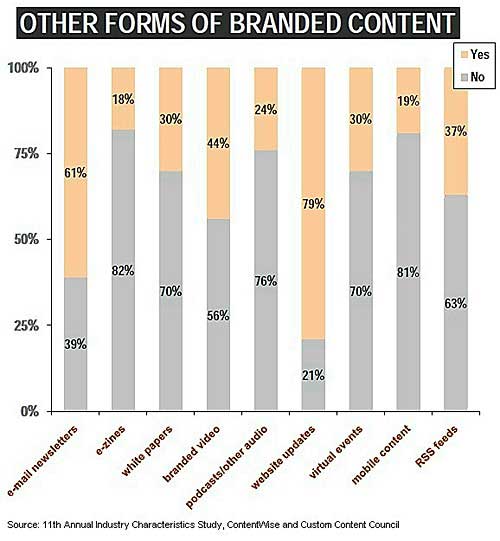 Overall, the use of digital increased year-over-year in all but three formats, on average from two to seven percentage points. Those that declined were email newsletters, podcasts, and RSS feeds, likely because of brands' adoption of social media initiatives, which may be replicating some of the benefits of those forms, according to the study.

For most brands, websites are the platform updated with the greatest frequency: In 2010, marketers updated websites 142 times on average—nearly three times per week—with articles, blog posts, and other content. 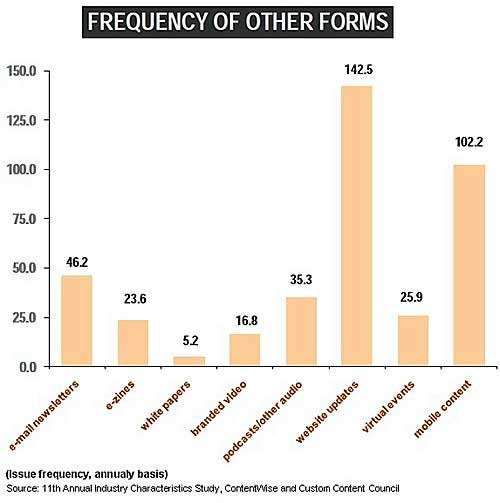 Among those using mobile, marketers issued an average of 102.2 mobile content messages. Email messages were distributed less frequently: On average, 46.2 newsletters were published by marketers in 2010, slightly less than one newsletter per week.

Looking ahead, video, websites, and mobile are strong:

Content volume is strong: Combining the frequency of all formats, marketers distributed custom content roughly 403.8 times in 2010, or 1.1 times per day.

Print remains the top channel for most custom media programs. The number of unique printed publications per company was 1.7 in 2010 (the same as 2009), but frequency per title declined to 6 times a year, while the number of pages per issue rose to an all-time high of 29.4.

The average circulation per issue also rose to 52,000 copies per issue.

Among that 79% of externally targeted publications, 37% were distributed from B2B companies and 63% from B2C.

Other key printed-content-related findings include:

* Custom content publishing is defined by the CCC as the marrying the marketing ambitions of a company with the information needs of its target audience via the delivery of editorial content (print, digital, or other media) so valuable that it moves the recipient's behavior in a desired direction.

About the data: The research was conducted via an emailed survey targeting a random sample of companies across all industries. Some 197 were completed and returned; among them AARP, Allstate Insurance, ASPCA, Boston Scientific, GE Healthcare, Hoosier Energy, MassMutual, Nationwide, TCF National Bank, and University of North Carolina.