US advertisers are expected to spend nearly $77 billion on interactive marketing by 2016—as much as they now spend on TV—according to a new report by Forrester Research.

The new forecast also anticipates declines in group-buying offers, due in large part to increased clutter in the space as ad exposures grow.

Among the top interactive marketing categories, ranked by forecast share of 2016 ad spend: 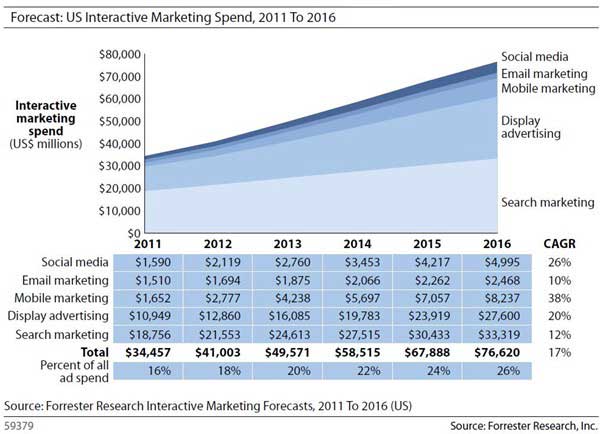 In the social category, the combination of social media management technologies, agency fees, and spending on paid integrated social network campaigns will drive social media at a 26% CAGR over the next five years, reaching nearly $5.0 billion and accounting for just 7% of all interactive spending by 2016.

About the data: Ad spending projections are issued by Forrester Research, based on a variety of sources, including Forrester's December 2010 US Interactive Marketing Executive Online Survey, fielded to 252 US interactive marketing professionals, who indicated they are decision-makers and influencers of interactive marketing budgets.