Facebook ad spending among clients* of Kenshoo Social grew 109% in the fourth quarter of 2011 over 3Q11 levels, dwarfing the 27% growth recorded in paid-search spending over the same period, according to a report by Kenshoo. 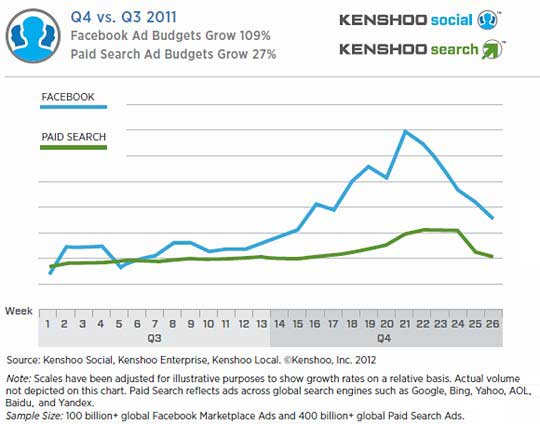 The analysis is based on more than 100 billion ads delivered on Facebook via Kenshoo Social, compared with 400 billion global paid-search ad impressions on search engines such as Google, Bing, Yahoo, AOL, Baidu, and Yandex.

Though some of the reported growth is likely due to seasonality, the trend is notable, and expected to continue in 2012 and beyond, as Facebook's ad ecosystem expands and marketers become savvier, according to Kenshoo.

Below, other findings from Kenshoo's quarterly ad report for the fourth quarter of 2011.

Facebook ads are becoming more popular among consumers: Ad impressions grew 47% in the fourth quarter over 3Q11 levels, while ad clicks increased 105% over the same period. 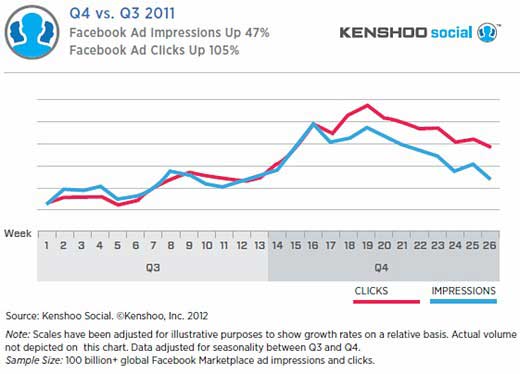 Moreover, Facebook ad quality appeared to improve in 4Q11 with consumers clicking on ads at a rate 27% higher, on average, than in the previous quarter.

About the data: Findings are based on the analysis of more than 100 billion ads delivered on Facebook worldwide via Kenshoo Social and over 400 billion paid-search ads delivered via Kenshoo Enterprise and Kenshoo Local, during the third quarter and fourth quarter of 2011.