'Generation C' Is the New Gen Y: Connected and Social

Americans age 18-34, or "Generation C" as they've been recently dubbed, make up 23% of the US population* but they comprise an outsized proportion of consumers who watch online video (27%), visit social networking sites and blogs (27%), own a tablet (33%), and use a smartphone (39%), according to a report by Nielsen and NM Incite.

The "C" in Generation C (AKA Gen Y) stands for "connected."

"Born sometime between the launch of the VCR and the commercialization of the Internet," writes Nielsen, Gen C consumes more digital content than any other age group—particularly via mobile devices.

Below, additional findings from The State of the Media: Report of US Digital Consumers, by Nielsen and NM Incite.

One-third (33%) of all tablet owners are members of Gen C, as are 39% of smartphone owners, the highest adoption levels among all age groups. 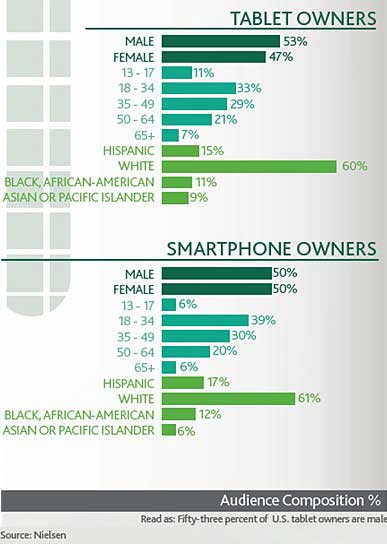 In terms of ethnicity, whites have the highest adoption levels of smartphones and tablets: 61% of smartphone owners are white, as are 60% of tablet owners.

Hispanics make up the next largest group of smartphone owners (17%) and tablet owners (15%), followed by African-Americans and Asian-Americans. 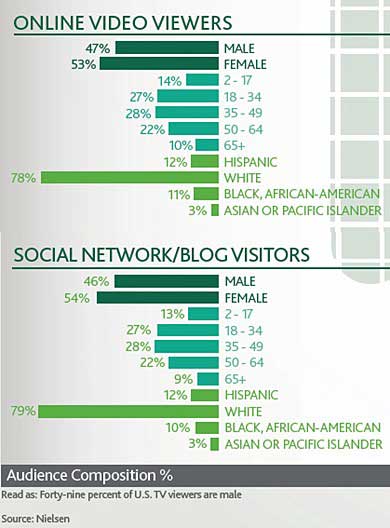 Hispanics make up the next largest group of online video users (12%) and social networkers (12%), followed by African-Americans (11% and 10%, respectively).

Gen C is far more likely than other age groups to use a wide variety of channels—particularly mobile devices—to access social networks: 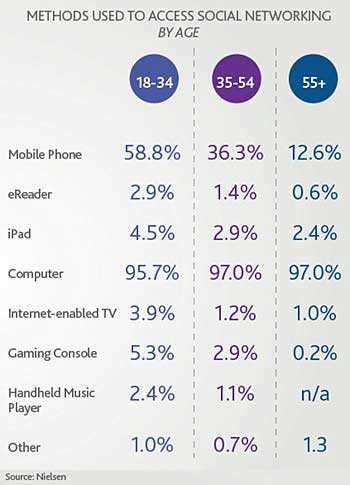 Gen C is also far more likely than other age groups to access social networks via iPads and gaming consoles.

Note: For the purposes of this study, members of Generation C are those now age 18-34. As with other demographic terms, definitions vary. For example, Booz & Co. defines Generation C as people born after 1990.

About the data: Findings are from Nielsen's State of the Media Report of US Digital Consumers for the third quarter and fourth quarter of 2011.