Which States Have Had the Biggest Increases in Small Biz Activity Since 2008?

The states hardest hit by the US housing bubble—Arizona, Nevada, Florida, and California—have registered the biggest rebound in small business marketing and sales activity since 2008, according to a recent analysis by CallFire.

The study used the purchase of local phone numbers by small businesses as a proxy for increases/decreases in economic activity since the collapse of Lehman Brothers.

Key findings of the analysis include the following: 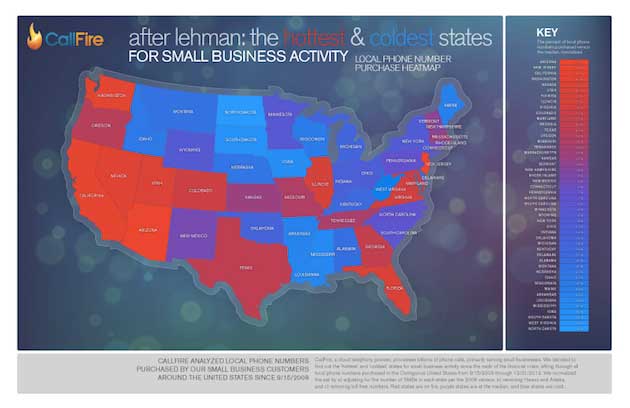 About the research: The report was based on an analysis of local phone numbers purchased in the contiguous United States from September 15, 2008 through December 31, 2012. Data was normalized by adjusting for the number of small and midsize businesses in each state per the 2008 census, removing Hawaii and Alaska, and eliminating toll-free numbers.