Despite reports over the past year that teens have fallen out of love with Facebook, the demographic remains highly active on the social network, according to a recent analysis by Socialbakers.

The study, which was based on 2013 data from 1,847 Facebook Pages, examined the "reach" of content on those Pages among various age groups—i.e. the number of paid and organic interactions by those groups with Pages over time.

Interactions by 13-24-year-olds actually increased 29% in the 12-month period examined, the report found.

Moreover, interactions by the next oldest group, 18-24-year-olds, also increased in the same time period (up 39%). Overall, the 18-24 age group remains the most active demographic on Facebook.

The increase in the reach of content and engagement by those users doesn't necessarily mean all teens are staying loyal to Facebook, however; it's likely that younger users are generally diversifying to multiple platforms and staying somewhat active on all of them rather than leaving one social network altogether for another. 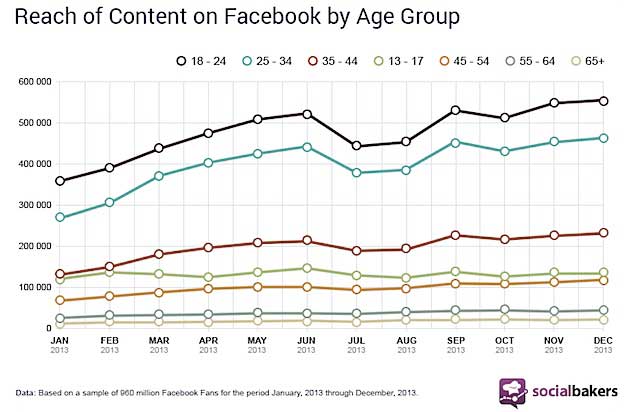 About the research: The report was based on January-December 2013 monthly data from 1,847 Facebook Pages with 960 million Facebook Fans.