20% of Commercial Emails Not Delivered

As the global recession grinds on, marketers continue to turn to email marketing to drive sales. But those efforts often confront email-deliverability obstacles: In the US and Canada, more than 20% of commercial email doesn't reach subscribers' inboxes, according to a Return Path study.

Commercial, permissioned emails on average reached only 79.3% of inboxes in the US and Canada during the first half of 2009 (January through June), a Return Path Deliverability Benchmark Report found:

B2B marketers face an even tougher time reaching business email addresses, which are often protected by additional layers of email monitoring, including systems such as Postini, Symantec, and MessageLab: 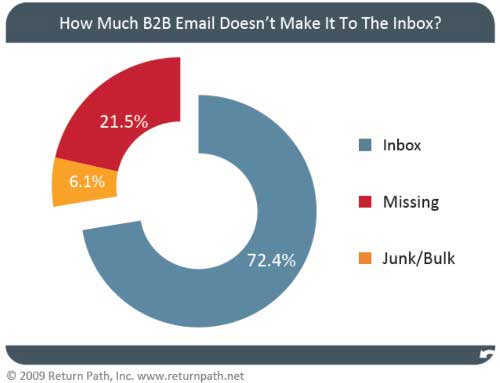 "Many marketers aren't even aware that one-fifth of their emails are never reaching the inbox," said George Bilbrey, president and cofounder of Return Path.

"In many cases, marketers [think they] are seeing...a 95% to 98% delivery rate. Unfortunately, many ESPs and marketers have developed the belief that whatever emails aren't bouncing have successfully reached the inbox. That's just not true, as...hard bounces aren't the only emails that aren't reaching your subscribers."

The Direct Marketing Association projects that email marketing will generate an ROI of $43.52 in 2009, at least twice that of search and other marketing channels. Email's strong performance, however, often covers up email-deliverability issues.

Good email performance could be even better if more of their emails were reaching consumers inboxes, Return Path said: "For example, if a company with a file size of 100,000 email records earns an average of $1 per email sent, they are missing out on an additional $20,000 from every email campaign with an inbox placement rate of 80%."

Bilbrey concludes that "as ISPs continue their daily battle to keep consumers' inboxes protected from the onslaught of spam, legitimate commercial emails that consumer want to receive aren't being delivered. It's imperative that marketers dig into their deliverability stats to truly see how many of their emails are successfully reaching the inbox."