A brand's presence on a social media site not only engenders consumer loyalty but also affects consumers' likelihood to buy, according to a study conducted by Psychster Inc. for Allrecipes.com.

Branded profiles on social sites tend to increase intent to purchase, especially when consumers can become fans of brands and add brand logos to their personal profile pages, the study found.

Purchase intent was higher when consumers could become a fan of a corporate profile (3.8 rating on a 5 point scale) than when this functionality was absent (3.6). (See blue circles in chart.) 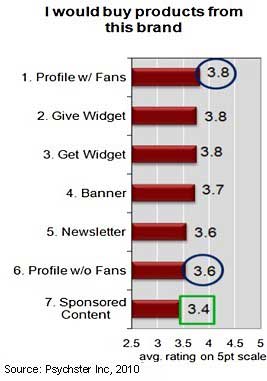 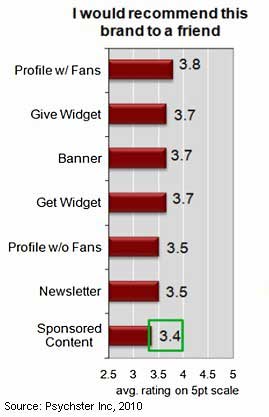 Below, other findings from the study Comparing User Engagement Across Seven Interactive and Social-Media Ad Types, which measured user engagement, advertising perceptions, and purchase intent across a variety of advertising types within social sites. 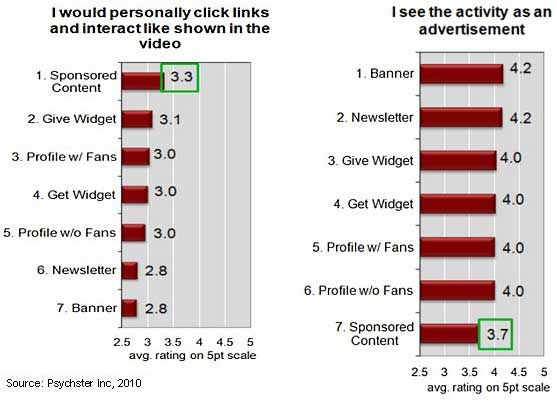 However, among ad types measured, sponsored content was least likely to elicit purchase intent and recommendations to friends (3.4).

Give and get widgets were more engaging than banners and newsletters: Consumers were more likely to want to interact with ads where they could create and customize something (e.g., a custom car or a dinner menu), but they were not significantly more likely to recommend the brands to friends or show intent to purchase.

Banners and newsletters were the formats most likely to be viewed as advertisements (4.2), but they were among the best to trigger purchase intent (3.7 and 3.6, respectively) and viral recommendations (3.7 and 3.5, respectively).