Penetration levels of microblogging and social networking continue to grow worldwide, driven by increased adoption in emerging countries; but as the Web has evolved Internet users have moved toward consuming and transmitting content rather than producing it themselves, according to Wave 5 of the GlobalWebIndex by Trendstream.

Much of the increased adoption of social networks worldwide has been driven by widespread use of mobile devices, according to the report. 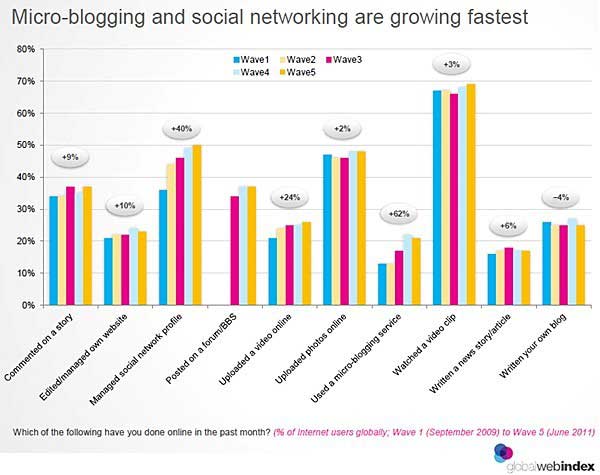 Note: The chart (above) illustrates penetration levels across a range of online activities. For example, asked which online activities they've done in the previous month, nearly 70% of people cite watching an online video clip, 50% cite managing a social network profile and 36% say they've commented on a story; only 25% have written a blog post and even fewer people (18%) have written an article.

Below, additional findings from Wave 5 of the GlobalWebIndex, which surveyed the online behaviors of Internet users in 27 countries.

Globally, 23.1 % of surveyed online adults worldwide used a microblogging platform (such as Twitter or other location-based services) in the previous month, as of June 2011.

But penetration levels across the 27 countries surveyed are uneven. In BRIC markets (Brazil, Russia, India, and China), microblogging penetration has reached roughly 40%, while it has stagnated at less than 10% among Internet users in the US (6.6%) and EU5 (UK, France, Germany, Spain, and Italy).

The level of content creation has dropped as social platforms encourage sharing of others content, according to the study. 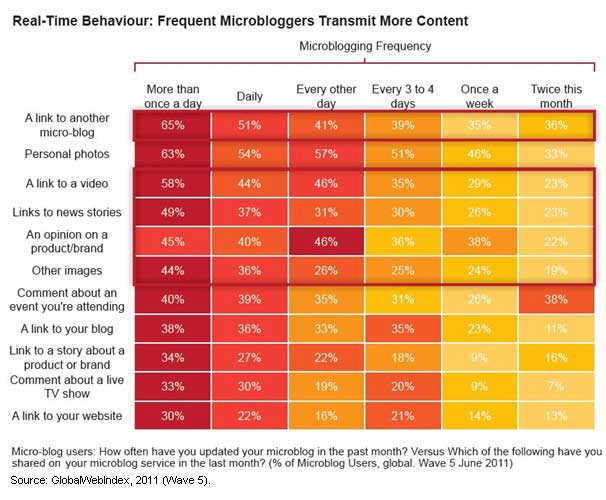 Although Facebook use is on the rise overall, established markets (US, UK, and Canada) have recorded declines in the penetration of key activities on the site.

In the US, for example, activities such as messaging friends and joining a group (in the previous month) are down 15 percentage points (PPs) and 10 PPs, respectively since July 2009. 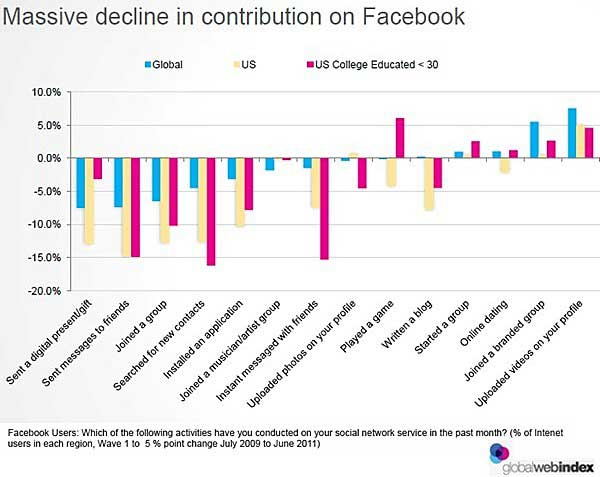 That trend is even-more pronounced among US college-educated adults under age 30, the original users of the platform. For example, the percentage of adults who search for a new contact on Facebook in the previous month fell more than 17PPs between 2009 and 2011.

However, some activities are on the rise. Joining a branded group (i.e., "liking" a Facebook business page) in the previous month increased nearly 6 PPs, and uploading videos to personal profiles increased nearly 8 PPS.

About the data: Wave 5 of the GlobalWebIndex is based on data collected in June 2011. The Index was initiated in July 2009 by Trendstream, and has since delivered five waves of research, surveying nearly 100,000 adult Internet users in 27 countries.