More than one-half (53%) of advertising and marketing executives say they expect companies to increase investments in Facebook marketing in 2012, according to a survey from The Creative Group.

Among marketing and ad executives surveyed, 43% also expect investments in Twitter marketing to rise, while 41% expect an uptick in Google+ spend, 38% in LinkedIn spend, and 36% in YouTube spend. 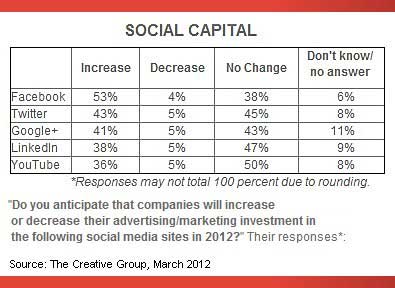