Fully seven in ten brands (70%) say they plan to increase their presence across social media platforms in 2012, while 59% plan to boost the frequency of social content publishing, according to survey from Awareness.

Many brands plan to focus efforts beyond the big three platforms (Facebook, Twitter and LinkedIn) in 2012, expanding their reach into multiple social marketing channels, the research finds. 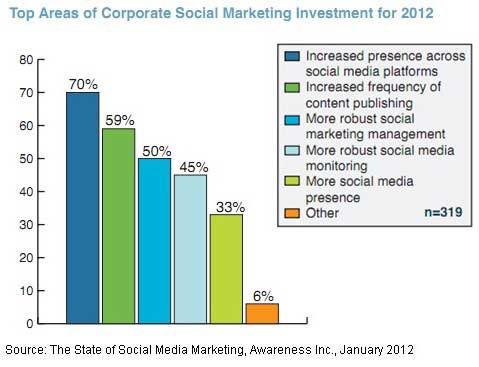 Below, other findings from the report titled "The State of Social Media Marketing," based on a survey of 320 marketers, of which 50% are from B2B companies, by Awareness, Inc. 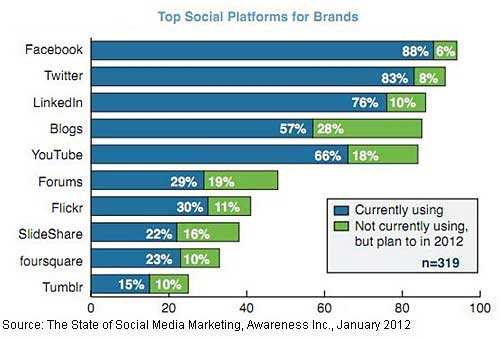 An additional 19% of brands expect to adopt forums, and 18% plan to adopt YouTube.

Among the big three social networks, LinkedIn is expected to register the strongest growth in 2012—with 10% of brands who don't currently use the professional networking site planning to do so in 2012.

Social platforms such as Foursquare, SlideShare, Flickr, and Tumblr are still uncharted territories for many brands: Some 60% to 76% of brands, on average, say they did not use those channels in 2011 and have no plans to do so in 2012.

However, most self-reported social media leaders say they had a presence on newer social platforms in 2011, whereas self-reported novices and dabblers had no significant interest in the channels during the previous year.

In 2012, the expected adoption levels across newer channels range from 30% to 45% among social leaders, whereas only 10% to 20% of all marketers expect to use the channels.

There is a direct correlation between the planned focus of social media investments and available social marketing budgets, though it's hard to tell whether the budget drives the focus, or vice versa.

Among those with limited budgets in 2012, the focus is more likely to be on increasing presence across social media platforms, a priority for 69% of such brands.

The top measures of social media success are associated with social presence and reach, including follower and fan levels (76%), Web traffic (67%), and social mentions across platforms (53%). 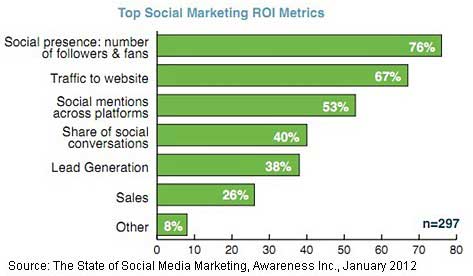 Fewer brands track social media in terms of new leads (38%) and sales (26%) for the enterprise, but those numbers are likely to grow in the coming year, according to Awareness.

About the data: Findings are of survey of 320 brand marketers, of which 50% are B2B and 36% earn less than 1 million in annual revenues, conducted in late November and early December, 2011.