Facebook's penetration among worldwide Internet audiences reached 55% as of December 2011, up 43 percentage points from 12% in 2007, according to a report by comScore Data Mine.

Across all regions worldwide, Facebook's penetration climbed dramatically over the past five years. Though US and European markets leveled off somewhat in 2011, other regions such as Latin America and the Middle East and Africa continued to attract large numbers of new users during the year, suggesting that although Facebook already reaches one-half of the Internet users worldwide, its audiences are still growing. 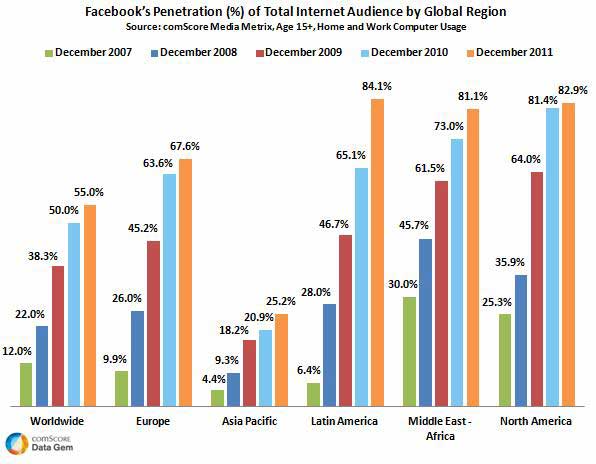 Facebook has the highest penetration in Latin America: 84.1% of the region's online population used Facebook as of December, compared with 6.4% who did so in 2007.

Facebook’s penetration was the lowest in Asia Pacific, reaching 25.3% of the region's Internet users as of December, up from 4.4% in 2007. However, some of the fastest-growing markets are in this region, comScore notes.

In addition to attracting huge numbers of people, Facebook is also the most engaging social network among world audiences, according to separate research from comScore.

On average, Facebook users spent 6.3 hours on the site in October 2011, up 40% from a year earlier, while visitors to second-ranked Odnoklassniki spent 6 hours on that site, up 36% from 2010: