Apple surpassed Google to become the world's most valuable brand in 2011, according to the BrandZ ranking of the 100 most valuable global brands from Millward Brown. Facebook joined the Top 100 for first time, at No. 35, surging 246% in brand value from the previous year. 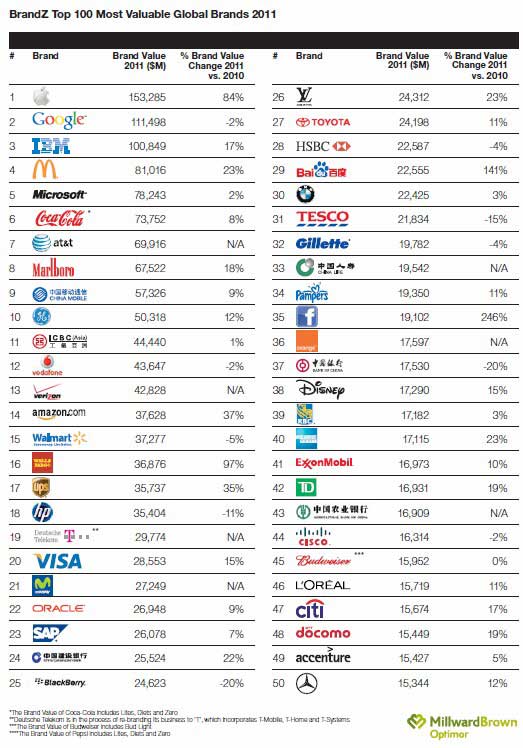 Apple's rise came on the success of existing and new products (such as the iPad), successful distribution channels (including retail outlets) and  "anticipation of a broadened strategy making the brand a trifecta of cloud computing, software, and innovative, well-designed devices," according to the report.

Overall, tech brands dominated the 2011 BrandZ ranking: Four of the five brand leaders are in technology.

Below, other findings from Millward Brown's report, the BrandZ Top 100 Most Valuable Global Brands.

Along with Facebook, the Top 20 Risers included online retailer Amazon and four other technology brands—Apple, Baidu, Siemens, and Cannon—which benefited from resurgence in B2B demand.  Among the Top 20 risers: 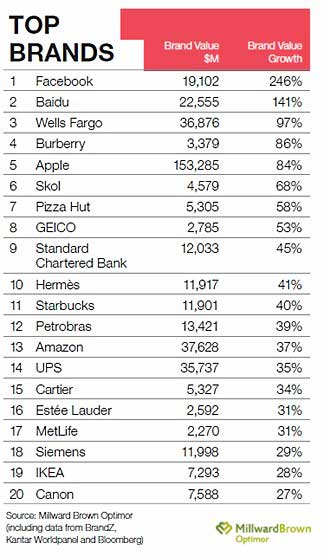 The economy appears to have shifted to growth with the Top 100 brands together appreciating 17% in brand value, to $2.4 trillion, driven by year-on-year growth in all 13 product categories.

Among those categories, food (up 22%), luxury (up 19%), technology (up 18%) led sector brand value appreciation, although a dramatic spike in value pushed insurance to first place (up 137%) because results included three large, expanding Chinese companies. 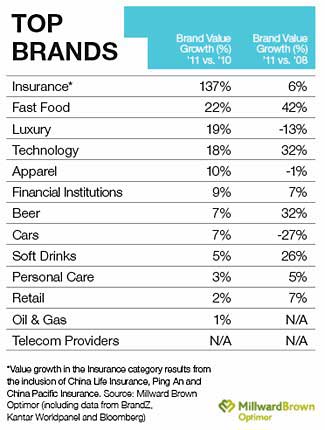 *The BrandZ Top 100 ranking, based on financial data and research among 1.5 million consumer and B2B customers in 30 countries, is derived using a methodology called, "Economic Use," in which value is calculated by looking at the role that brand plays in the purchase decision and identifying what proportion of the business value can be attributed purely to the brand. The ranking uses financial data from Bloomberg and market data from Datamonitor.

About the data: The BrandZ study, conducted annually by Millward Brown on behalf of the WPP, measures the brand equity of thousands of global "consumer facing" and business-to-business brands, and has interviewed over 1 million consumers globally.