Although Google is still the most important source of referred traffic to major news websites, Facebook is growing in importance, driving as much as 8% of total visits to some websites, according to a study by the Pew Research Center. 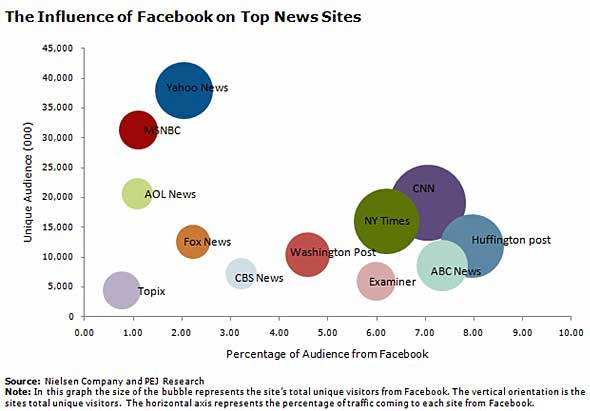 At the low end are AOL News, MSNBC, and local aggregator Topix, each deriving roughly 1.0% of total site traffic via Facebook.

Below, other findings from the study, Navigating News Online, published by Pew Research Center's Project for Excellence in Journalism in partnership with The Nielsen Company.

Among the 25 major news sites studied, 17 (roughly two-thirds) are legacy news organizations (those attached to a news operation that is in another platform such as TV or print). The remaining eight (one-third) are online-only ventures, split between pure aggregators and those that produce both original and aggregated content.

Overall, some 60% of visitors to such sites arrive via direct channels, e.g., typing in a URL, and the remaining 40% arrive via referral sites, with Google the most important player.

Google's influence varies by the type of site. The two most popular aggregators of local news in the US (as well as Google's news aggregation site, Google News) depend on Google's search engine for the majority of their traffic.* 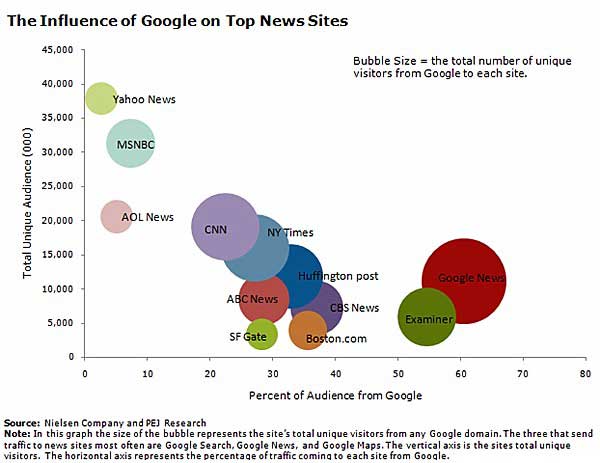 Among legacy news sites, established brands in their own right, Google is less significant but still an important source, accounting for 36.91% of traffic to the NY Daily News, 27.21% to the New York Times, 26.86% to The Washington Post, and 28.58% to ABC News.  The Chicago Tribune came in at the low end with 21.19%.

Twitter's influence in sharing of links to news sources is limited, playing a role in only nine of the 25 sites studied. Among eight of those nine, Twitter accounts for roughly 1% of total referred traffic, but accounts for over 3 times that level (3.53%) to the remaining one site, The LA Times. 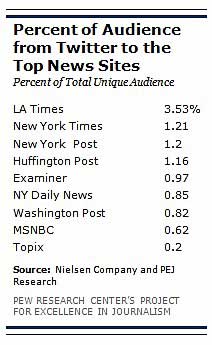 About the data: Findings are based on monthly averages of data from The Nielsen Company Netview Database, collected in March, June, and September, 2010.