Android owners are the least prepared for mobile security threats: 39% say they haven't taken any precautions to prevent someone from misusing data on their cell phone if it were lost or stolen, according to a new Gadgetology survey from Retrevo.

That compares to 30% of BlackBerry owners and 26% of iPhone owners who say the same: 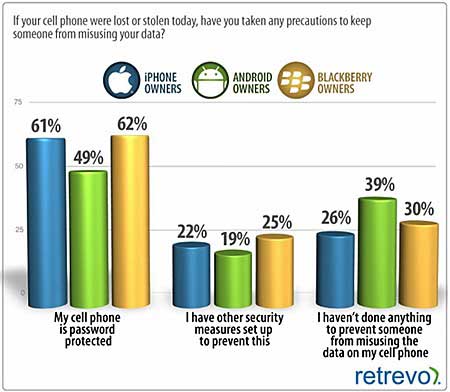 Meanwhile, more than six in ten BlackBerry owners (62%) and iPhone owners (61%) say their mobile phones are protected via password, compared with 49% of Android owners who say the same.

Below, additional findings from Retrevo's recent Gadgetology Report, based on a survey of online adults conducted in June 2011.