Though more than two-thirds of mobile consumers (67.0%) say location-based coupons are convenient and useful, nearly one-half (44.8%) say they have security concerns about their locations being tracked, according to a survey from Prosper Mobile Insights.

Nearly three in ten (29.6%) mobile consumers (people who use smartphones or tablets) say they are neutral about security issues, whereas one-quarter (25.6%) are not concerned at all. 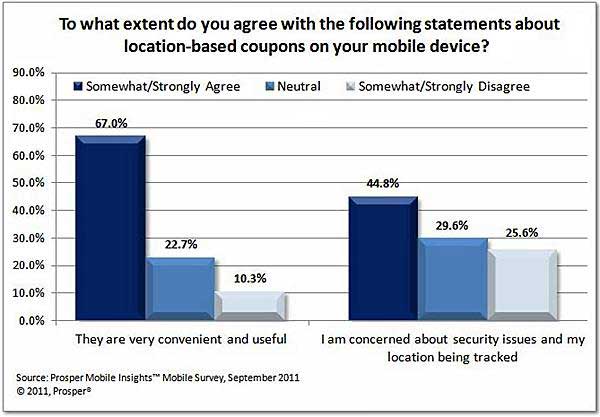 Despite such security concerns, more than one-quarter (25.6%) of mobile consumers say they are open to receiving coupons via their device when they are located near a store, though twice as many (51.1%) would prefer to receive coupons via mobile email. 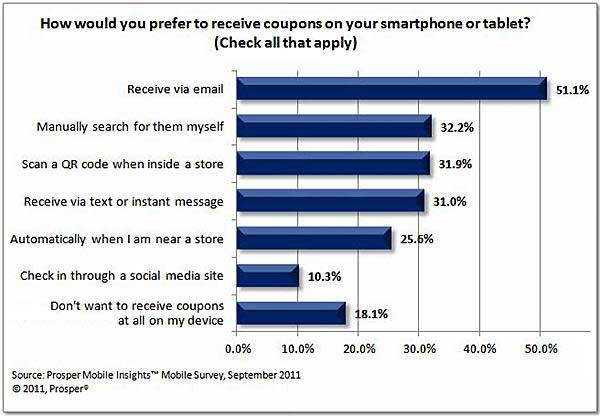 Overall, 81.9% of mobile consumers say they are open to receiving coupons on their smartphone or tablet in one form or another, whereas 18.1% say they don't want to receive coupons at all on their devices.

Mobile consumers use their devices to conduct a wide variety of shopping-related activities, including the following:

Nearly two in five mobile consumers (39.7%) say they have made a purchase directly via mobile device and 36.2% have scanned a QR code.

Other key findings among mobile users:

About the study: Findings are from the September 2011 Prosper Mobile Insights Mobile Survey, among 348 smartphone and tablet users polled via their devices, September 22-24, 2011.