What Is Primetime for Mobile Video Viewing?

Tablet video viewing in the United States peaks in the evening, with primetime hours (8 PM to midnight, local time) constituting 25.7% of total views, according to a recent report from TubeMogul.

The report, based on data from 2Q13 in-app pre-roll campaigns, found that iPad and Android tablets have generally similar viewing patterns for most of the day. However, iPad viewing peaks at 10 PM, slightly later than viewing on Android tablets.

As for viewing videos on smartphones, the variance in time is even greater between iOS and Android.

Viewership on iPhones tends to decline during primetime, whereas 33.9% of all views on Android phones take place between 8 PM and midnight.

Viewing patterns are generally similar for tablets and smartphones for most of the day. However, viewers favor their tablets over their mobile phones during primetime (8 PM to midnight).

Days of the Week

Almost half (49%) of mobile video ads are watched between Thursday and Saturday. 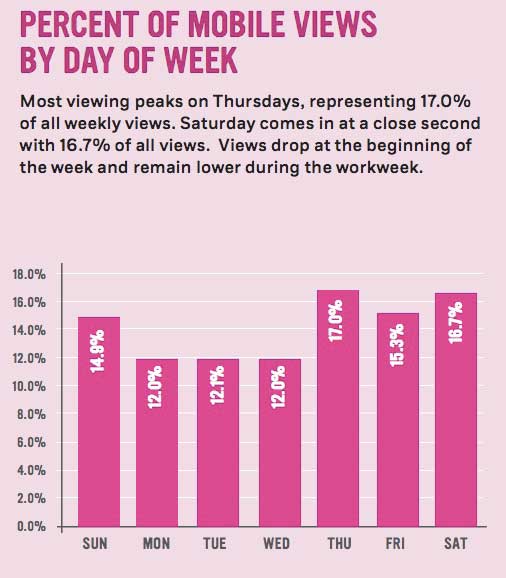 About the research: The report was based on data from in-app pre-roll campaigns that ran through TubeMogul's media buying platform in the second quarter of 2013. All time zones were localized.