Global consumer spend on mobile apps is expected to grow 24% in 2016, reaching $50.9 billion—and eventually doubling from that level within four years to reach $101.1 billion in 2020—according to a recent report from App Annie.

The report was based on forecast gross spend by global users across Apple's iOS App Store, Google Play, all third-party Android app stores, Microsoft's Windows Phone Store, and Samsung's Galaxy Apps. The projections include revenue generated from in-app purchases, subscriptions, and paid downloads, but not advertising and e-commerce revenue.

The rapid mobile app revenue growth will be driven largely by two factors, according to the analysis: strong app adoption in developing economies, and mobile apps' ability to capture greater wallet share in mature economies. 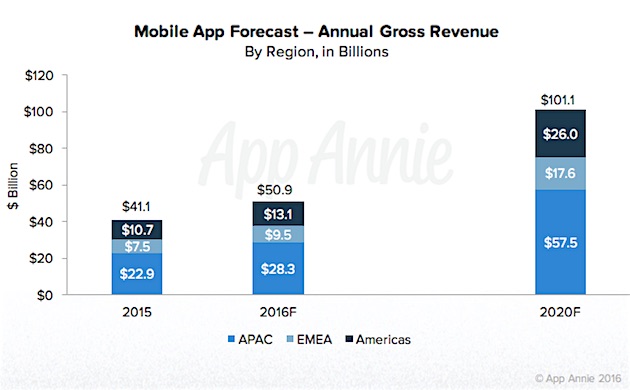